Obscure comics brought to the big screen at last

“Eternals” is the new installment into Marvel’s universe. This cast of characters are ten eternal beings who defend the human race against an alien species called the Deviants, on the orders of a Celestial named Arishem. Each of the Eternals have a special ability, including speed, flight, laser vision, healing, mind control, strength and illusion among other abilities as well. The team has spent their time helping to shape and guide the human civilizations throughout history.

Having exhausted the original plotlines, it seems like Marvel is diving deep into the comic archives to gain new story lines and characters that haven’t been touched on yet. Though the main events in this movie happen after “Avengers: Endgame,” in the same timeline, it seems like a whole new universe with completely unknown characters.

Consequently, the plot of the movie dragged a bit. It was overwhelmed by the stuffy amount of story building and character development, which goes to further show that the writers are starting to stretch for material.

Though the movie is set after “Endgame,” the writer and director, Chloé Zhao, decided to show many points in history where the Eternals were interacting with the humans. The audience gets to see ancient Babylonia, Mesopotamia, Tenochtitlan and even the atomic aftermath on Hiroshima as the Eternals visit these places through their time protecting earth from the Deviants.

The cinematography was beautifully done throughout the movie, as well. The fight scenes between the Eternals and the Deviants were epic and almost live up to the Marvel precedent from previous movies. The ethereal animal forms of the Deviants were rendered with clarity and meaning, even when the fighting intensified.

The awe-inspiring wide shots of historical places, such as the ancient city of Babylon with the Hanging Gardens, were well crafted and placed in the movie. They were brought to life with such detail and historical attention that it almost made up for the slow reveal of the actual plot line.

The cast of this movie is evidence of Marvel’s previous success as it is chock full of big names. As there are ten main characters, it is hard to pick which ones stood out the most in the movie throughout, as the actors were all on equal playing field with one another as far as talent was concerned.

Director Zhao casted Gemma Chan as Sersi, best known for her role as Astrid in “Crazy Rich Asians” and other British movies or TV shows. She gives her character Sersi the soft depth that is required of someone who can love a human race as unconditionally as she does, especially when it is evident that they witness all the great wars in history. Chan gave the audience a standout performance and added a new level of empathy and compassion to the Marvel universe.

Richard Madden, as Ikaris, is another example of great characterization. He is known for his roles in “Game of Thrones” and in the live action “Cinderella” remake as the prince. Ikaris is the most powerful, strength wise, of the Eternals and Madden plays this soft giant well. Madden’s character does not immediately see all the potential and beauty contained in humans, he is more of a bigger picture, practical and logical thinker, which subtly contrasts against Chan’s Sersi.

Not all the actors in this movie are big names. One newer face to the screen is Lia McHugh, who is another Eternal named Sprite. McHugh has played supporting roles before, but she now gets to be one of the leads. Her character is a conflicted and moody teenager, with some of the wisdom that comes with being an Eternal, but she is stuck in a teen’s body. McHugh’s performance as Sprite is dynamic and breathes some new life into the weathered actors who are on screen with her, like Angelina Jolie and Salma Hayek.

Overall, “Eternals” is a feat worth a watch from the beautiful cinematography to the well tested actors’ performances. Marvel needed to step back a bit from crushingly fast plots, as they needed time to develop characters that are not as familiar as the beloved big six from Avengers. 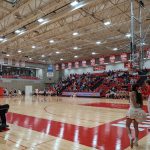