The Northwestern Red Raiders football team opened up their season on Saturday, Sept. 2 in Kansas against Ottawa University with a resounding 41-16 win.  The story of this game revolved around the Raiders’ offense as they racked up an impressive 674 yards of total offense, second most of all time and just two shy of the record set last year against Dordt.  This game was controlled by the Raiders from the start, as they jumped out to an early 20-0 lead.  Ottawa struck back with a touchdown and field goal of their own to make it a 20-10 Raiders lead at halftime.

The second half, however, proved to be all Raiders.  A stifling effort by the defense combined with another impressive showing by the offense in the second half proved to be too much for Ottawa to overcome.  While Ottawa’s offense struggled to get anything going, the Raiders continued to pour it on and opened up a 41-10 lead.  A late touchdown by Ottawa proved to be insignificant as the Raiders were able to secure a 41-16 victory.

Offensively, NW was led by Jacob Kalogonis, who rushed for a career high 254 yards on 21 carries with 3 touchdowns.  This was the most rushing yards an NW player has had in a single game since 2001 and was the sixth-most all-time for a NW player. Tyson Kooima, making his wdebut for the Raiders, impressed as he threw for 272 yards and three touchdowns to only one interception.  NW’s head coach Matt McCarty was impressed with his team’s execution.

“Our offense executed at a high level.  The o-line line played a tremendous game and really set the tone for us on that side of the ball,” McCarty said.

Defensively, the Raiders were led by Joey Novotny, Sean Powell and Garrett Sayler with 7.5 tackles apiece.  In the defensive secondary, Jerod Hanson registered one interception and 2.5 tackles.  Defensively, NW gave up 439 total yards: 255 passing and 184 rushing.

Do We Care Too Much? 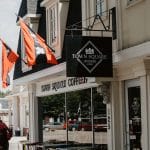