The offense of Northwestern moved the ball with prolific ease in a convincing 46-27 win against Briar Cliff.
Over 600 yards were compiled as Raiders extended their winning streak to five games and improved to 6-2 (4-2) on the year.
The lead was taken when junior Brandon Smith rushed for a score in the first quarter and junior Eli Groenendyk caught his first touchdown of the game with only 41 seconds left in the first half.
The game was far from over heading into the locker room, with NW only holding a 14-7 advantage.
NW burst open their lead in the second half, scoring on three of their first four possessions to start the third quarter. NW put 32 points on the board in the second half to secure the game.
On the contest, sophomore Davis Bloemendaal set a career-high with 327 yards and three touchdown passes to go along with a rushing touchdown. Statistically, the game was his career-best, but he shunned the idea that there is nothing left for him and the squad to improve on.
“No, I don’t think it was the best game I’ve ever played,” Bloemendaal said. “There were some things in the option I didn’t do quite right, and big plays helped me out a lot.”
The win was certainly not an individual effort, as Smith and sophomore Theo Bartman both cleared the century mark on the ground, rushing for 111 and 121 yards, respectively. Smith had two rushing touchdowns, and sophomore Jesse Selgeby added one of his own in seven attempts for 60 yards.
This was the first time on the season the much-hyped Raider ground attack had two backs rush for 100 yards in a game.
Groenendyk set a career-high with seven receptions for 182 yards and two touchdowns. Junior Tyler Walker also scored on one of his five receptions and 82 yards through the air.
The Raiders also coughed up the ball for five fumbles on the afternoon.
On the defensive side of the ball, senior Chris Butler led the squad with six tackles and also had one interception. Junior defensive lineman Jordan Carlson totaled 4.5 stops and had two sacks on the day.
As a team, the defensive squad of NW has only allowed 16.2 points on average over the past four games.
The No. 22 Raiders will look to continue improving their playoff hopes as they host No. 23 Dakota Wesleyan on Saturday. The winner will still be in the mix as a possible playoff team, while the loser will face a nearly impossible chance of making to the postseason.
Bloemendaal and the Raiders are confident in their chances.
“I think we’re definitely a playoff-caliber team,” Bloemendaal said. “But I don’t know how everything will turn out. Right now we’re playing really well. We have a good balance running and throwing the ball.”
The ranked match-up will kick-off at 1 p.m at Korver Field. 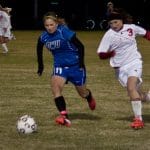