Many of us are fortunate to awake from last night’s nightmare and continue living. For others, that nightmare never comes to an end. Living a life filled with violence, some may even prefer to continue experiencing such dreadful dreams than experience the pain and suffering that awaits them when they wake up. A light of hope is needed to combat this darkness and The International Justice Mission is doing just that.

The International Justice Mission (IJM) is a global organization that protects people in poverty from violence. IJM began their work after the Rwandan Genocide brought a group of lawyers together who vowed to improve and terminate such horrible tragedies. IJM partners with local authorities from 20 program offices in 13 different countries to combat slavery, violence against women and children and abuse of power by police against the poor. Their work involves rescuing and restoring victims’ lives, holding perpetrators accountable and helping strengthen public justice systems. One of their efforts is raising funds through pop-up thrift shops to support rescue missions.

These pop-up thrift stores have been hosted on college campuses across the country over the last seven years. After hearing about this type of fundraiser being put on by other IJM chapters, the IJM chapter here at Northwestern decided to host a pop-up thrift store on our campus. “We were given the idea by IJM last year as a fall fundraising campaign,” said NW’s IJM chapter president Zoe Heemstra. The event made its first appearance on campus during the fall of 2021. People from the college and community dropped off clothing donations in the weeks leading up to the event. Students involved with the IJM chapter then sorted through the clothing and set it all up for display in Ramaker. “The response of our campus and community blew us away, so of course, we wanted to do it again,” said Heemstra.

According to Heemstra, the event was a great success this year as well. With extra traffic from people coming to attend the homecoming events on campus, they were able to raise over 800 dollars. “This is a cool, practical way for people to learn about what is going on both across the world and in our community and contribute to fighting human trafficking. It raises awareness, plus everyone has clothes that they don’t use or no longer want so it provides a way for anyone to get involved,” senior Ruth Chalstrom said. NW’s IJM chapter encourages students to keep a watchful eye on their upcoming spring advocacy campaign. 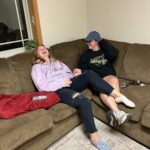 Students benefit from sleep and rest 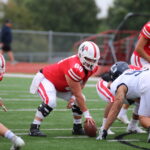