Editor’s Note: This story is a part of The Bacon, the annual spring satirical issue published by The Beacon. That means the story you’re about to read is a work of fiction. Any resemblance to real-life people, places or things is intended purely as satire, parody or spoof; it is not intended to communicate any true or factual information. Enjoy!

With the new “way of living” consisting of society being quarantined to their houses, people have done all they can to pass the time with their families – from baking and crafts to family games and Goose Chases, people have come up with crazy, fun ways to make the days go by faster.

One specific activity being put to good use is an up-and-coming video and music platform – TikTok – which has views going through the roof. As more and more family videos are created due to the quarantine, even our own President Creg Ghristy has joined in on the fun.

Once college classes were officially moved to online, Ghristy turned his attention to what’s really important – creating influential dance videos. His son took it upon himself to gather his family together and entertain others through TikTok. With videos ranging from family gymnastics to creating the hottest dances movies, Ghristy’s family has become the go-to entertainment during quarantine. However, what Ghristy didn’t expect was to become the newest TikTok legend.

Recently reached out to by the TikTok creators themselves, Ghristy has been asked to up his dancing game by creating more videos and increasing subscribers. After reaching 1,000 followers and receiving his verification badge only a month ago, his videos have been trending ever since. Since then Ghristy’s followers have been increasing rapidly. With 999,997 current followers on TikTok, he only needs a few more to make a living off other people’s addictions to the app. It is safe to say our own President Ghristy has grown to be the hottest trend on TikTok, even more so than Charli D’Amelio, who was named “reigning queen of TikTok” by New York Times. D’Amelio’s dance moves have nothing on Ghristy’s now.

As some people spend up to two or three hours a day on TikTok, or at least those without jobs might, Ghristy knows he needs to meet the needs of those waiting for his newest video. Some of his latest trend ideas for TikTok videos include dancing to “Renegade,” recreating quarantine struggles, pranking family members and more. He’s even considered challenging someone on TikTok, similar to how Aidan Williams challenged Zach Overweg to see who could get the most followers. The possibilities are endless.

However, Ghristy ran into some problems within the Orange City community. Whenever he leaves the house, the neighbors see him and start replicating his dance moves. When he goes to the grocery store, people wearing masks start to dance in his aisle. Even at his own house, people are swarming so they can show off their dance moves through the windows. No matter where he goes, he can’t seem to get away from his legendary moves on TikTok. He’s become too famous.

Even though his celebrity status seems to be biting him in the butt, Ghristy has appreciated the attention his videos have brought to Northwestern, the opportunities to entertain his fellow community members and the fact that his students now see him as a dancing TikTok legend. 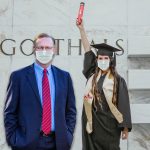