When one door closes another opens. No one knows this to be more true than the tennis professional Daniela Lozano.

“When I was injured I thought I was done,” Lozano said. “After a while I realized I would need a plan B, and my dad said I needed to think about my future.”

Lozano’s tennis career actually started out on the field — the soccer field that is.

“I started by playing soccer for the club team in Colombia,” Lozano said. “I got teased a lot at school for playing soccer and being a girl so I quit playing sports for a few years.”

After avoiding the field for many years, Lozano jumped at the chance to pick up sports again when her dad invited her to play tennis with him when she was 13.

“He just asked me one day,” Lozano said. “I started going after class and it turned from two times a week to every single day.”

Lozano quickly recognized that tennis was her passion.

“I told my parents that I wanted to go professional but they wanted me to demonstrate that I could handle it, so they put me on a probation period,” Lozano said.

Lozano had to prove she could keep her grades up and maintain her household chores along with improving on her tennis abilities.

“I just started competing in tournaments,” Lozano said. “And I played really well; I just kept moving up the brackets.”

Lozano quickly went from playing tennis for fun after school with her dad, to having personal tennis coaches and traveling abroad to play professionally.

By the age of 15, Lozano was an international professional tennis player.

“I really liked it,” Lozano said. “I got to travel around the world and learn about the culture.”

After traveling and living in South America, Canada and Europe for five years, Lozano was in Peru for a singles tournament and tore one of her quadricep muscles.

“I had to go home and heal from my injury,” Lozano said. “It was one of the most challenging times in my life because I had no idea what to do next.”

Lozano spent six months recovering at her home in Colombia. While she recovered, her father encouraged her to begin pursuing new dreams and go back to school.

“I put a lot of effort and time, emotional time also into my tennis career,” Lozano said. “So when it came down to the decision to leave that dream behind and go back to school to study, it was hard.”

She decided to pursue her education in America because she had researched the types of athletic scholarships that were available. She started her college career at Huntingdon College in Montgomery, Ala. This is her first year at NW because she transferred in as a sophomore.

Although this is not the life Lozano pictured for herself, she is very optimistic.

“Sometimes I feel like I’ve wasted my time those past few years, but I just remember that I learned a lot about the world and a lot about myself,” Lozano said.

Lozano encourages others to pursue their dreams as well.

“If it’s what you love, all the hard work and all the time is worth it,” Lozano said. “It will definitely not be easy, you must learn to make sacrifices.”

Lozano is still transitioning to the small town life Orange City has to offer, but while she’s here at NW she is hoping to have a few experiences she missed while she was traveling around the world.

“Tennis made me grow up really fast,” Lozano said. “I was alone so much being a professional, I didn’t get to have the experiences everyone else did. I’m hoping to be like everyone else and just go day-by-day.” 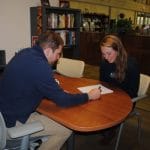