Despite his tremendous handicap, Backstrom has never let it slow him down and he’s never let it keep him from enjoying life. You might have seen Backstrom, a computer science and math double major from Maddock, North Dakota, around campus, sitting in piles of leaves or riding a bike with his feet on the handlebars.

When Backstrom was ten years old, he was mowing the lawn on a large rider mower, when he was thrown off. The mower continued to operate and Backstrom was unable to move out of its way. It took off his right leg from below the knee, and seriously damaged the muscles on his left leg.

Surprisingly, when asked about the accident, Backstrom said “it wasn’t painful at all … It’s hard to explain the experience to someone with two legs.”

His mother, who was in the garden, came rushing to help and called for an ambulance. Backstrom was rushed to a Medevac helicopter, and after an overnight stay in the local hospital, took a plane to Minneapolis where they did a majority of the surgeries.

The first surgeries cleansed the wound, mostly to get the grass out. Doctors then moved onto repairing the calf that had been nearly destroyed.

Backstrom always tried to look on the bright side of the experience.

“I thought the surgeries were really fun,” Backstrom said.

Backstrom further recalled that the high dosage of morphine he was on caused him to exhibit some irregular behavior. He would sometimes give his parents a weather forecast as if he was a squirrel.

Backstrom also enjoyed the sympathy. “I was getting all these gifts from people,” Backstrom said. “[I] thought, ‘Hey, this is pretty cool.’”

After some skin grafts from the burn unit and some therapy at the children’s hospital, Backstrom got fitted for his new leg. While he was waiting for the leg to be made, he stayed on crutches for six months. Afterwards, he had to learn to walk again.

Again, Backstrom found the positive side of the situation. He had to get a new leg about as often as he changed shoe size, but he found enjoyment in getting a new color every time he got a new leg.

With sports, Backstrom did what he loved in spite of his missing limb. A lineman on the football team all throughout high school, he ended up scoring eight points and scaring some referees after a dog pile where his leg fell off.

Backstrom’s attitude for the whole situation has been one of security and acceptance.

“I never wondered why it happened to me,” Backstrom said. “You don’t think of it as a loss.”

He does not spend his time comparing himself to others and wishing he had two legs. He just accepts that he has one. “I am who I am,” Backstrom said.

Although he doesn’t like it when people make a big deal about his one leg, Backstrom nevertheless finds it funny when people joke about it. He’s been called C. Ripple (cripple), and he himself likes to make light of the situation.

At times, he will put his leg on backwards, and ask people to tie his shoe for him or walk to class with his backwards foot just to arouse the curiosity of bystanders.

Not surprisingly, Backstrom has found that his prosthetic leg has shaped his life.

Early on in middle school and high school, “it definitely made me more open and less shy,” Backstrom said.

“It’s a great way to meet new people and start conversations,” Backstrom said, looking back on the experience. “It made me realize how fragile life is.”

Backstrom further felt that he started taking his faith a lot more seriously because of the adversity posed by having only one leg. He said, “I don’t know where I would be spiritually if that hadn’t have happened.” 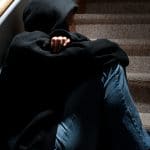