The Red Raider baseball team finished a tough weeklong stretch that began with a road trip to Minneapolis and ended with a spur-of-the-moment venture to Omaha, Neb. The Raiders went 0-6 in those contests and now stand at a record of 9-11.

Following a spring break excursion to sunny Arizona, where they went 8-2, the Raiders came back to reality, to the chill of the Midwest and to last-minute schedule changes due to the weather. But they refuse to blame Mother Nature for their recent slump in play.

“I don’t think the weather or schedule changes have anything to do with our games recently,” said sophomore infielder Mitch Peschon. “Everyone, including our opponents, has had to deal with it. We just need to play better baseball.”

Last weekend, the Raiders played two bright-and-early double-headers at Mall of America Field in Minneapolis against Mayville State. On Saturday morning at 6:45, NW fell 5-2 to the Comets.

In the second matchup, the Raiders were defeated 11-0. NW only managed to tally three hits. Mayville State scored at least one run in every inning but the first.

On Sunday, NW again played a double-header against Mayville State at Mall of America Field.

In the first matchup, NW picked up the play and was narrowly defeated 4-3. Junior pitcher Tyler Stuerman had nine strikeouts in six innings and surrendered only four hits. Junior second baseman Eric Widener drove in two runs on one hit.

They dropped the next game 4-2. Senior Corey Van Gorp had two RBIs.

On Tuesday, the Raiders trekked to Omaha to play in a double-header against Bellevue. NW was defeated in the first game 4-0 and again fell to the Bruin Bears 2-1 in the second contest. NW’s offensive woes continued as the Raiders only managed to have a combined five hits throughout both games.

In their final game in Arizona against St. Ambrose, the Raiders had 14 hits and scored 12 runs, which nearly doubled their offensive output in the last six games.

“Recently, we haven’t hit the ball very well, and our defense has had a few lapses behind our pitching staff,” Peschon said. “Our pitching staff has been great. We need to play better behind them offensively and defensively.”

The Raiders look to get back on their feet with some rest and some solid practices to hone their skills.

“We’re going to use these upcoming practices to work on the things we’ve been struggling with,” Peschon said. “If we can get back to swinging the bats like we did in Arizona and play solid defense behind our pitchers, we’ll be fine.”

The Raiders seek revenge Saturday in a double header against Bellevue in Omaha. The first game begins at 2 p.m. 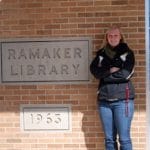 Shaw leaves library to others