The lady Raiders finished their regular season with a 13-3 GPAC record. When the office of the GPAC Volleyball Tournament released the rankings, the Raiders had earned the No.2 seed in the upcoming tournament.  Northwestern was tied with two other GPAC schools, Midland and Hastings, but due to tiebreak procedures, NW came out on top, putting Hastings in the third seed and Midland fourth. With a 16-0 record, Dordt College took the No.1 seed spot in GPAC play.

Overall in the NAIA, NW sits No.9, and the first GPAC play took place this past Saturday, Nov. 3.  Doane finished five spots behind NW in a four-way tie for seventh place in the GPAC, and there was no upset to these rankings when Saturday rolled around.

NW took Doane with a 3-0 win at home in the Bultman Center.  Lauren Hilger and McKenzie Fink led the Raiders offensively, with Hilger locking in 15 kills and Fink on her tail with 14.  Lacey Wacker was credited with 41 assists against Doane and also contributed defensively, leading the backrow with 10 digs.

Doane led late in the first set with a 17-14 lead, forcing a time out by NW.  Coach Van Den Bosch motivated the Raiders to get back on track, and the Raiders took a 4-point streak to bring their confidence back at 18-17.  The two GPAC teams battled back and forth for the lead over the next few points, but the Raiders decided to go on another surge and took the match 25-21.

The Raiders took the second and third sets with a similarly tight score of 25-19 for both games.

Wednesday night, the NW Raiders took on third-ranked in the GPAC Hastings, winning in four sets.  Lauren Hilger again led the Raiders in scoring, with a match high for her of 20 kills.  NW took the first set handily and a 6 point serving streak by Wacker as well as the front squad hitting .667 contributed to a 25-14 win.

Hastings took the second set 25-22, but NW came back and won the third set 25-19.  The closest game of the night was the final set, where the Raiders snuck by with a 25-23 win to take the whole match.  Emily Van Ginkel scored the last point of the night with a solo block, sending the Raiders to the GPAC Championship.

The winner of the GPAC will be determined this Saturday, Nov.10, where NW will take on Dordt.  The game will be played at  7p.m. at Dordt. 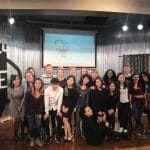 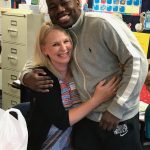