The Red Raider men and women were ready to compete this past Saturday, October 9, in Sioux Center after successful outings at Roy Griak for the men and at Briar Cliff for the women. This was an important meet for both teams as they met up with some GPAC teams, just four weeks out from the GPAC conference meet.

The men’s team finished the day in fourth place out of nine teams.  They were led by senior Levi Cross with a personal best of 25:41 in the 8K.  Cross finished the race fourth overall, breaking up a pack of Dordt runners at the finish line.  Four seniors followed behind Cross to round out the scoring for the Raiders.  Senior Ian Wiersma and senior Dawson Jacobsma both finished in the top 35 for the men’s race, posting times of 27:12 and 27:16.

“As a team we didn’t race as well as we had hoped.  As we go forward into the last four weeks of the season, we must work to do so we can be in a position to beat other teams as the conference meet rolls around,” said Wiersma.

On the women’s side of the race, the Raiders were led by senior Morgan Marker, posting a second-best time of 19:33.  She was followed by sophomore and co-team captain Katlyn Wiese who finished the 5K in 20:01.  Overall, the women finished the meet placing sixth out of eighth teams.

This meet was an important one for sophomore BreElle Van Zee, who was able to compete in her first collegiate cross country meet after battling injuries throughout her freshman season.

“The women’s team is continuing to gain experience as the upperclassmen have not had to take on scoring roles in the past and the freshmen are learning the ropes.  The number three through five spots have been held by different raiders throughout the season, which is exciting as we continue to grow.”, said Coach Carrie Krohn.  As for the men’s team, “After beating Doane in the first meet of the season, we were upended by the Tigers today.  We’ll work to re-group and finish the season well at Mount Marty.”,

Both the men and the women’s teams will compete next at the Mount Marty Invitational in Yankton, SD on Saturday, October 23rd at 10:30 a.m.  The GPAC Championships will be held at Landsmeer Golf Course in Orange City on November 6th at 10:45 a.m. 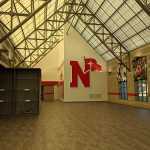