Last fall, Northwestern’s playoff hopes took a serious hit after a 17-16 loss to Concordia. On Saturday, the Raiders repaid the favor to the No. 14 Bulldogs with a 30-28 victory. It was the Bulldogs’ first loss of the season. It was an action-packed final quarter of the game as each team scored 14 points with less than 11 minutes left.

NW looked to be in control for the entire first quarter. Freshman Paul Hutson punched in a two-yard touchdown run to give the Raiders a 6-0 lead on their first possession. The extra point was unsuccessful. Senior Davis Bloemendaal found senior Jacey Hoegh for a 23-yard touchdown pass on the first play of the next Raider possession.

Concordia was held scoreless until 1:50 left in the second quarter when the Bulldogs found the end zone on a short run after a 13-play drive. A Bloemendaal interception with 41 seconds left proved to be costly as Concordia quickly turned around and scored. Quickly, the visitors were up 14-13.

With 10:14 left in the fourth quarter, Concordia took a 22-16 lead on a four-yard run and successfully completed the two-point conversion.

NW answered with a one-play drive that consisted of a 69-yard touchdown scamper by sophomore Jessie Riley.

“Our offense wants to go fast all the time,” said junior Levi Ettleman. “It is what we are good at. so to be successful in that aspect was a big push for the team.”

The 23-22 margin was not enough for the Raiders, and they again found the end zone on the legs of Hutson from six yards out. All nine plays of that drive were rushes. The scoreboard read 30-22.

Concordia kept the Raider fans from sitting comfortably by scoring a touchdown with less than two minutes remaining to make the score 30-28. Their two-point conversion was unsuccessful this time.

The Raiders couldn’t run out the clock and ended up punting to the Bulldogs. Freshman Sam Van Ginkel recorded a big sack to help stop the comeback attempt.

Even without senior starter Theo Bartman, two Raiders broke the century mark on the ground. Riley had 117 yards, and Huston had 116.

“We needed to play our game and the rest would take care of itself,” Ettleman said.

Bloemendaal threw for 172 yards and one touchdown. His favorite target was junior Ben Green, who had five catches.

NW will play at Dordt on Saturday. Opening kick-off is at 1 p.m. 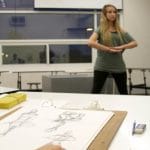