No. 16 Northwestern hosted conference rival Briar Cliff on Saturday in a game that was dominated by the Raiders from start to finish, resulting in a 57-7 thumping. The Raiders were spearheaded by senior running back Brandon Smith, who rushed for a career high 247 yards and four touchdowns and played a pivotal role in helping the Raiders break the school record of offensive yards by accumulating 663.

“I had no idea I had even rushed for that many yards until one of the coaches told me at halftime,” Smith said. “I was really shocked to be honest.”

After a Charger three and out, Smith ran 76 yards for another score on the Raiders’ first play of the possession. Following a fumble recovered by the Raiders, junior running back Theo Bartman punched it in from the two-yard line on the ensuing drive, putting the score at 21-0.

The Chargers punted on their next possession, and a six-play, 68-yard drive was capped off when Smith scored yet again on a seven-yard run.

On the second possession of the second quarter, Bartman crossed the goal line on a four-yard run that put the score at 27-0 on a failed extra point.

After another Charger punt, the Raiders capitalized on a 63-yard drive that climaxed when junior quarterback Davis Bloemendaal found senior tight end Jacey Hoegh on a four-yard touchdown strike.

With 2:53 left in the first half, Smith punched in his fourth touchdown of the first half to put the score at 48-0 at the midway point.

In the second half, the dominance continued even as many of the starters’ days were done.

An impressive display of special teams commenced when O’Brien added a 31-yard field goal midway through the third quarter.

Then freshman safety Donavan Weldon blocked a punt that was returned for a touchdown that put the Raiders up 57-0 after three quarters.

Briar Cliff scored on a late fourth quarter touchdown run that ended the game at 57-7.

The two backs broke the school record for single game rushing yards with 475.

Bloemendaal went 11-20 for 150 passing yards and a touchdown pass.

Bartman was also the Raiders leading receiver, hauling in three passes for 53 yards.

Senior linebacker Aaron Jansen was a one-man wrecking crew for the Raiders, tallying up 5.5 tackles with 2.5 sacks.

“Theo and I complement each other so well. We do have similar styles of play, but we are both complete players that make defenses unable to key in on a single aspect of our game,” Smith said.

The 6-2 Raiders return to action at 7 p.m. on Saturday in Mitchell, S.D. against Dakota Wesleyan. 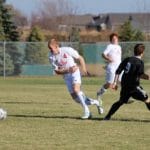