After stumbling in an 82-59 loss against Morningside on Feb. 1, the Northwestern men’s basketball team was looking to recover. They did so the following Saturday, beating Doane 100-84, giving themselves momentum into their matchup against Mount Marty on Wednesday, a team that had not won a conference game. With a confident win a few nights before, the Raiders were able to keep the Mount Marty Lancers winless in the GPAC.

Mount Marty started off the night with a 6-2 lead over the Raiders, after a pair of baskets from beyond the arc. This would be the Lancer’s last lead of the night, as junior Colton Kooima’s eight straight points made the score 10-6.

The rest of the first half was all about NW. The Red Raiders went into halftime leading by a score of 41-24. Junior Derek Buysse led the team with 15 points and six rebounds. Kooima was able to contribute as well, scoring eight points and grabbing three rebounds. While the Raiders had a total of eight turnovers, NW was able to shoot 100 percent from the free-throw line and 41.7 percent from field-goal range.

The second half got off to a different start than the first as junior Nathan Wedel did not start on the court due to an apparent injury. He would not return for the rest of the game. In his place came the hot hand of Buysee. The Raiders continued their momentum from the first half into the second, quickly jumping out to a 28-point lead.

NW was able to keep this lead and even build on it as the Raiders came out on top by a score of 97-62. Buysee continued his first half success with 16 points in the second half, totaling a career-high of 31 points. Colton Kooima was able to add to his point total as well, finishing the night with 17 points.

Senior Justin Van Kalsbeek scored a total of 12 points, including an alley-op that caused the Red Raider student section to go nuts. Fellow senior Jordan Baker was able to snatch a total of eight rebounds, along with seven points.

The convincing win was a great momentum boost for the Raiders. Junior Tanner Hillbrands feels optimistic about the team’s recent wins and their prospects going forward.

“We are just trying to build momentum going into the last two games of the season,” Hillbrands said. “If we win out, we are conference champions so it’s all about building momentum.”

Ranked 20th in the nation, the Red Raiders will look to continue their current success into their final two conference games of the regular season when they take on 14th ranked Midland this Saturday, and 7th ranked Dakota Wesleyan next Wednesday. 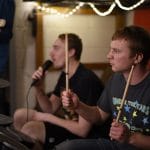