As Emma Watson causes a buzz across the globe by bringing attention to the depressing reality of gender roles in society, it seems ironic that for the first time in history, Marvel comics is casting a female lead for a superhero film.

Marvel Comics announced on July 15 that “Thor the Thunder God” will be performed by a female in the newest film, which is expected to release in the fall of 2015.

The real question at this point is, however, if this is beneficial to the feminist movement or damaging to the way women are portrayed in comics.

“I think they’re heading in the right direction, but whether they are going about it in the right way is the question,” said Art Professor Phil Scorza.

The history of women in comic books is soiled by suggestive roles. Women were originally portrayed simply as the damsel in distress in the ‘30s, and they were eventually “upgraded” to sex objects by the late ‘40s. For the most part, they continue to play roles intended to receive the male gaze.

“One of the things I find that I don’t like about superhero comics is the way women are portrayed,” said Michael Kugler, a professor in the history department. “The stereotypical pose of women is emphasizing the sex appeal of their bodies.”

“However resilient and incredible women are in the comics, they are still drawn in a particular way,” Kugler said. “That’s because sex sells.”

In the comic book world, women’s breasts are referred to as headlights, and often the breasts actually play a prominent role in character development.

“It’s no wonder that 13-year-old boys are the ones buying the most comics when that’s what you see,” Kugler said.

An often overlooked reality is that women buy comics almost as much as men. As of February, 46 percent of comic book consumers were women. It’s no surprise that women tend to buy comics with a female lead. When comics have a prominent female role, female readership raises to 62 percent.

“Now they are trying to correct the political incorrectness,” Scorza said. “Marvel is taking the step to put a female on screen because they are making more money on the big screen in movies than they are in comic books.”

Disney’s Marvel owns Max Comics, a pornographic comic company that proves appeareance trumps action. The compnay has a net worth of $142.92 billion.

“I think it has a lot to do with the box office,” Scorza said. “Honestly, sex sells and they are just trying to sell movies, not make a political statement.”

In the new movie, Chris Hemsworth’s Thor will be shamed and forced to give up his hammer to the new female lead.

“Maybe because they are just putting new actresses in the roles of previously played characters, it feels like they are just trying to correct their incorrectness,” Scorza said.

But putting a female in a role previously depicted by a man might be the safest bet.

“People are comfortable with that character, and Marvel is taking advantage of that by bringing a little shock to the story by bringing in a woman,” Kugler said. “I have grown really irritated with superhero comics because now I see there isn’t a single interesting thing as far as a story, that a superhero comic can say that hasn’t been said before.”

It’s hard to argue with the truth that sex sells. Although society is taking steps in the right direction, women in comics have always been dressed provocatively. It’s safe to say it won’t change onscreen anytime soon. 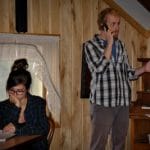 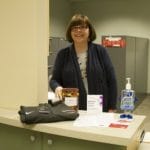