As the weather gets warmer, pants get traded for skirts or shorts, sleeves get shorter and for some Northwestern students, the shirts are abandoned altogether.

Every year, bare-chested boys are seen playing disc or tennis golf all over campus, and every year, girls face questions about whether or not they are allowed to srtip down to swimsuit tops or sports bras to cope with the heat.

Although the official dress policy has no black and white rules laying out what students can and cannot wear outside, many girls feel that they are expected to cover up more than the boys are.

“On campus, it seems that the perception is that shirtless is OK for guys and not girls,” said director of residence life Marlon Haverdink.

Many girls feel like they are doing something wrong when laying outside in sports bras or swimsuits.

“I sent out an e-mail [about modesty] last year because a couple of male staff members talked to me,” said resident director of Stegenga Hall, Rebecca Alsum. “Steggy is right in front of their direct walking path, and they were saying the girls [wearing swimsuits outside] made them uncomfortable.”

Although Alsum meant the e-mail to be a reminder for girls to respect the males on campus, some girls saw it as a scolding or a reminder of rules.

“It’s almost subliminal sexism when we get e-mails telling us to cover up,” said sophomore Rebekah Wicks.

Boys and girls both agreed that the majority of the time, neither sex wants to ditch the shirts just to get the opposite gender’s attention.

“I’ve never heard anyone say they’re going to take their shirt off because they want girls’ attention,” said senior Devon Cadwell. “Who decided that the reason that people take their shirts off is for sexual reasons?”

For boys, going shirtless is often an issue of comfort or man-to-man bonding.

“It’s hot with a shirt on,” said sophomore Aaron Galloway. “[Going without a shirt] is a rite of passage into summertime.”

And for girls—the sun is just as warm, and many are interested in getting some tan after the long winter.

Many boys sympathize with the girls on this.

“Girls like to tan,” Galloway said. “I don’t think they’re doing it for attention.”

Of course, not all girls on campus want to trade in their tops for more revealing alternatives.

“I’m really modest and I value my body,” said junior Jenni Kahanic. “I’m not offended by other girls that wear less; it’s just my decision that I don’t want just anyone to see my body.”

Kahanic said she wouldn’t want girls to travel the campus in sports bras or swimsuits.

“I wouldn’t want my boyfriend to see every female body on campus, whether or not it’s in a lustfulway,” Kahanic said.

It seems the intentions, more than the coverage of the clothing, are the deciding factor in whether or not students are dressing appropriately on campus.

“There’s no list of good or bad clothes,” said Corey Kundert, resident director of West Hall. “If girls started getting closer to West than Steggy [while tanning], then I would question their intentions, or if girls are running in front of Coly with swim tops on to get attention, then that would be inappropriate.”

However, girls often feel like there are double-standards and unsaid prejudices when it comes to their intentions in wearing their swimsuits or sports bras outside.

“There was a group of guys in front of Steggy in a kiddie pool this weekend. I thought, ‘Geez! How much ruckus would I cause if I was wearing even a one-piece in a pool like that!’” Wicks said. “I think there are some people on campus who can be preachy about their beliefs, and they can be judgmental to girls when they’re outside tanning.”

As a resident director for three years, Alsum has seen these feelings of double-standard can hurt the girls in her hall.

“We’ve had conversation about what we can wear outside almost every year, but more this year than ever,” Alsum said. “This year, I’ve seen more hurt than ever. Girls have come to me this year saying they feel hurt by this.”

Even boys think that the imbalance in what girls think they can wear outside can be harmful.

“It assumes that guys are more lustful than girls,” said junior Aaron Hoekstra.

Not all students see the college as the one placing the double-standards on girls, but see society itself being at fault.

“I think what’s expected of different genders in our culture is unfair, but not the college’s rules,” Kahanic said.

The debate could be solved with a clear-cut set of rules in the handbook, but many staff and students don’t see that as an effective way to deal with the issue.

“There’s always some who would like to see more parameters,” Haverdink said. “We could give clear directions, and it would be cleaner, but we value the conversation—the gray area.”

Kundert, who went to a college that had strict and clear-cut rules about the same issue, appreciates the looser rules NW has.

“I’m a strong believer in not having standardized rules,” Kundert said. “If there are always rules telling people what to do, they have no chance to learn for themselves. This way, the sense of responsibility is on the student. I hope that students talk about the issue more this way.”

Alsum, on the other hand, believes clearer rules would be useful, but believes students should be involved in the discussion of any new regulations that are to be made.

“I think rules and policies should be in place, but if they are put there without any discussion, people just get frustrated,” Alsum said.

And of course, students are by no means eager to have more rules placed upon them.

“It’s a strange concept that I would come to college and have more rules than before,” Cadwell said. “It seems like a small thing to complain about. It’s such a small issue—is this something that’s worth our time to worry about?”

Whether or not the rules regulate the way boys and girls dress outdoors, many believe the stigmas will continue to be there.

“People will always bring in their own beliefs,” Wicks said. “Some will say it’s ‘skanky’ to wear a swimsuit outside, and as long as people hold those beliefs, what people wear won’t change.”

So for now, it looks like NW is at a standstill before any drastic changes in dress will take place.

“There’s no way we can make everyone happy with the issue,” Alsum said. “But placing judgment on women based on what they are wearing is a very dangerous thing.” 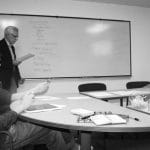