The Northwestern softball team had a solid showing in Arizona over spring break, finishing with a record of 9-3 during the week of March 2 in Tucson.

NW started off well with a 5-3 win over a ranked Madonna University (Michigan) team in the regular seven innings, but the next four went over and under the regulation length. In their second game, the Raiders put together a massive rally against Cardinal Stritch, forcing the game to an extra inning where sophomore Emily Strasser scored on a squeeze bunt by junior Jessica Harald to complete an eight-run comeback.

The winning continued as NW dominated Presentation College and Trinity Christian, winning by mercy rule 13-0 (six innings) and 12-1 (five innings), respectively. In the shutout win versus Presentation, junior Samantha Ubben recorded her first career no-hitter, the first in five years for NW. Sophomore Jennifer Boeve batted a perfect 4-4 in the win over Trinity Christian. Boeve leads the team in hits and RBI’s on the season, followed by junior Bri Giordano and Strasser.

The Raiders then fell by one in extra innings to Madonna in their second bout but followed that up by reeling off another four straight victories, highlighted by a nine-run sixth inning against Valley City State for another comeback victory by a score of 14-10.

Junior Emma Schnell pitched a complete game in a close 2-1 victory over Antelope Valley, and the bats stayed hot throughout the week. NW batted over .300 multiple times, and a handful of players added to their total of multi-hit games on the season. The Raiders defense was strong as well; throughout their week, they outscored their opponents 94-46.

The trip finished out with a 2-2 split over the final four games, both wins coming by the score of 10-2, one of them in a mercy rule. It was a good dozen games for NW, as they improved their record to 14-6 nearing the midpoint of the season.

A short turnaround was expected to be in store for the team, as they finished up in Arizona and planned to have a home doubleheader on Wednesday, March 11 against Briar Cliff. The Raiders have historically had the edge over Briar Cliff in softball (22-8 all-time series) and look to carry their present momentum forward into the season as well. The doubleheader was postponed with no make-up date determined yet. 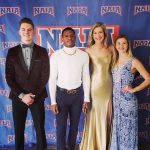