There is nothing to say here, except that the beginning of the Northwestern College Volleyball season is as normal as ever. Coach Kyle Van Den Bosch and company have been stirring up wins since 2005 that now seem borderline old in all respects. This is not to downplay the movement of culture-changing,disciplined players and coaches who are united in their approach to the game.

Instead, this article is an introduction to the Grecian subject of sport philosophy, a sub-discipline that is just as much a satirical take on the questions reporters ask at press conferences as it is a legitimate humanity. For a brief refresher, let ‘humanity’ be defined as a liberal experience directed at learning human culture. Also: humanity is freedom.

Many athletes equate playing sports to freedom. Therefore, in the context of volleyball, the process of becoming more human includes smacking a leather ball at the floor on the other side of the net. Again. And again. And again.

Until what? A satisfying glimpse of boredom derived from the repetitious thwunking and screeching that echo across the court in pulsing rhythms. Boredom is the preferred outcome.

The sound of boredom is the Bultman Center bursting with woos and whistles and the brass of the pep band. Not quite ‘Roger Federer as Religious Experience,’ but close enough that the swarms of attendants recognize the higher power at play and respond in a sociologically significant manner. Their reactions are validated.

For example, a pass from Junior Granstra for a Senior Horstman kill is an instinctual surrender from years of disciplined practice. The audience is at a magic show waiting for the act’s completion. The monotony reveals the win.

The more wins, the more intense the satisfaction. Of course, like this Labor Day Classic tournament, when sophomores Jazlin De Haan and Alysen Dexter led the team in double-digit kills past No. 4-ranked Park and the University of Saint Mary, satisfaction comes from taking straight sets with the same stamina as a dog chasing its tail.

For anybody tripping over the philosophical abyss that is athletics, please embrace the irony. Those who have been athletes only know the ecstasy of being in motion; they know the power of habits. Other than that, there is really no precise explanation for why sport calls to the heart. In the instance of Van Den Bosch’s crew, there is just something about volleyball. 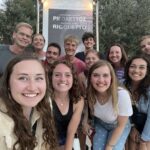 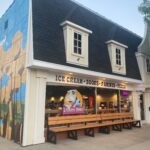