Curt Bomgaars, a 2010 Northwestern graduate, is up for the Young Alumni Award for his startup energy bar business FLYJOY.

Each year the Council for Christian Colleges and Universities gives an award to an alumni who has graduated within the last 10 years from a CCCU institutionan and has achieved uncommon leadership or success in a way that reflects the values of Christian higher education.

The idea for FLYJOY began when Bomgaars went on a Summer Study Abroad to Ecuador with Spanish professor Rick Clark.

“I was able to see the need of the people there and see ways to alleviate poverty,” Bomgaars said.

At that time, microfinancing was starting to become popular. Microfinancing provides a source of financial services for entrepreneurs and small businesses lacking access to banking and related services.

“I was challenged to think of how I could use what I learned to make a difference,” Bomgaars said.

He wanted to create a product that showcased something he found during his travels. What he found was quinoa.

According to the Food and Agricultural Organization, quinoa has been singled out as a food with “high nutritive value, impressive biodiversity, and an important role to play in the achievement of food security worldwide.”

Through this, Bomgaars decided that he wanted to develop an energy bar loaded with nutritional and natural ingredients.

Bomgaars started this journey by heading to Ecuador again.

“The semester after I graduated I went to Ecuador and took classes in Spanish and international business,” Bomgaars said.

While there he looked for suppliers of quinoa and came across a nonprofit, which translates to mean, “Women in family foundation.” Men often would have to leave their families and head to the cities to find work in order to feed their family. This nonprofit existed to provide women a second source of income that allowed the men to move back with their families. Bomgaars started to buy quinoa and other quinoa-based products directly from them.

“I started to create energy bar recipes in my kitchen at home and probably tried over 100,” Bomgaars said.

“I started with something that was familiar to me, which was a scotcheroo bar,” Bomgaars said. “It’s not healthy, but it’s tasty. I looked for a balanced texture of crunchy and chewy.”

Each year a portion of the profits that FLYJOY makes are donated to a nonprofit called “Hope International,” which they refer to as uncharity.

According to FLYJOY.com, “Uncharity reminds the participants they are created to be creative and intelligent. That’s why we donate 10 percent of the profit from every FLYJOY bar to nonprofit organization HOPE International and their uncharity programs.”

FLYJOY’s next goal is is to get 1 percent of the $6 billion energy bar market, which allows the company to donate $500,000 a year to HOPE International.

“This year we are going to have a big push for distribution,” Bomgaars said. “The past year we have been doing a lot of promotion, testing and sampling. We have new packaging and are connected with KeHE.”

KeHE is a large distributor to many big supermarkets, and through that FLYJOY is hoping to be able to move into more stores. They can currently be found at HyVee, Amazon, Fareway and Natural Grocers. 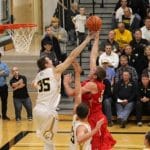 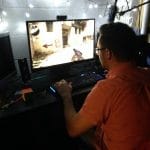