With an explosion of color and flavor, the frozen yogurt craze has hit Orange City.

De Zoete Winkel, Dutch for “The Sweet Shop,” is anything but subtle as it boasts electric blue and cotton-candy pink walls. A ‘50s theme was owners Neel and Melissa Johnsen’s original design idea. “I love old drive-in movies,” Neel said. “I just like the ‘50s.”

It’s bright retro meets futuristic Candyland. With colorful spirals, old records adorning the walls and a large mural of a ‘50s drive-in, the Johnsens took the theme seriously. “We did a bit of homework on that,” Johnsen said of the color selection and design pieces.

Whether sitting on the comfy couches, chrome and white four-person tables or high barstools, the atmosphere is cozy and eclectic. Soon the shop will add a jukebox to give an even more authentic feel.

Six large, self-serve machines line the back walls and provide a wide variety of flavor options including fruity pomegranate and mango; creamy cheesecake and cookies ‘n cream; and chocolate and mocha, along with many others.

The pomegranate energy/vitamin boost is “Red Bull in yogurt form,” according to Neel. “That’s for the college kids; it’s full of energy and caffeine.”

After filling their cups with any number of yogurt flavors, customers have numerous topping choices. From wall-mounted pulleys to a complete treat bar, customers can choose any amount of additions. Pineapple, kiwi and berries; cookie dough, brownie and cheesecake bits; candy pieces and a variety of sauces: the possibilities abound.

On Monday’s grand opening, a line of eager customers formed far outside the shop’s doors. Energy was high, and excitement was obvious as visitors anxiously bobbed heads hoping to somehow shorten the line.

Northwestern juniors Kara Nonnemacher, Kaitlin Floerchinger and Elizabeth De Jong were excited about the new addition to Orange City’s attractions. “It brings a big city flair to small town Iowa,” Floerchinger said. “It’s a lot like ice cream, with that tropical kick,” she said after tasting her vanilla yogurt with pineapple toppings.

After trying a mix, Nonnemacher offered advice: “You have to be careful with your flavor selection. It’s not like ice cream. Fro-yo has its own unique flavor.” Junior Elizabeth De Jong agreed after a not-so-perfect combination. “I put some of the white chocolate sauce on, and I shouldn’t have,” she said.

Don’t get your heart set on a flavor though. “We’ll be switching up the flavors,” Neel said. “We’ll keep the staples,” but the owners are already expecting new flavors. They’ve ordered a non-dairy based blue daiquiri sorbet and a sea salt caramel pretzel.

Perhaps one of the bigger draws is the shop’s hours. The yogurt bar is one of few places in Orange City open on Sundays. “We’re always looking for something to do on Sundays,” Neel said. “Now we can stay here.” Once things get going, the Johnsens will reassess their decision, but they say they are looking forward to the business.

Students agree that the hours are a positive component. “It gives us somewhere to go on Sundays, and we don’t have to go to Sioux City to get fro-yo,” said junior Keely Bracelin. Many anticipate the shop will become a popular college student hangout.

De Zoete Winkel has only been open for a week and a half, but the Johnsens are optimistic about the community’s response. “I haven’t heard one bad thing,” Melissa said, “except that we need a highchair.” They already have an order shipped.

The idea for a frozen yogurt shop was a bit of a whim. After a Sioux Falls visit, the couple asked what if…? Once the location opened up, the Johnsens felt they couldn’t say no. “We decided to jump off the ledge and go for it.” So far, it’s been a success.

Naming the shop was a relatively easy task. The Dutch name for “Sweet Shop” was purposeful on the Johnsen’s part. “We wanted to make sure we kept it Dutch,” Neel said. “We wanted to tie in the community.”

Avoiding frozen yogurt in the name was also strategic. “We did that specifically because maybe in five years we will decide to start serving something different,” Neel said. Whether it’s the frozen yogurt itself or the many topping choices, sweet is accurate.

Self-proclaimed “yogologists,” the Johnsens say they hope to bring the frozen yogurt craze of the west and east coasts to small town Iowa. They have big plans and aim to provide a fun place for students, families and people of all ages. 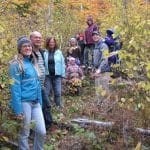