Each year, millions of people watch the big game. Last year alone, it was estimated that more than 110 million people watched Super Bowl 50, a classic that featured the Denver Broncos’ Peyton Manning defeating the Carolina Panthers’ Cam Newton in what would be Manning’s last game as an NFL quarterback. For football fans of the student generation, it was one to remember. The quarterback emulated in backyards growing up was riding off into the sunset in style.

Even for non-football fans, Super Bowl 50 was a classic. The 30-minute halftime show featured Coldplay, along with appearances from Beyoncé and Bruno Mars, and the commercials were clever, funny and effective.

Super Bowl LI will take place at 5:30 p.m. on Sunday in Houston, pitting the dominant New England Patriots against the Atlanta Falcons, a franchise that has yet to win a Super Bowl. Lady Gaga will be the halftime performer, and there will be an onslaught of fresh commercials.

So, what does that mean for Northwestern students? For sophomore Lexi Weaver, this Sunday will be just another Sunday.

“I don’t even know who is in it,” Weaver said, after being asked what her plans for Super Bowl Sunday were. “I am guessing people will be watching so I will probably end up watching it somewhere. I mean, the commercials are the best part.”

For others, the Super Bowl is one special day out of the year, especially when their team is taking part.

Tanner Ortlund is one of these people. A life-long Patriots fan, Ortlund is excited for Sunday to roll around.

“I think it will be a good game. Both teams are the best teams out of each conference,” Ortlund said.

Like Weaver, however, Ortlund doesn’t really have plans for the game.

“Usually my family and grandparents get together at my house and we cook a bunch of food and watch the game,” Ortlund said. “But I probably won’t be able to make it home this year. I may just watch it in my apartment.”

It may be hard for students to plan for a game so far in advance when they have tests, essays and outside activities to worry about.

To help out students, the Student Activities Council giving students the opportunity to eat and watch the game in the Vogel Room so some of that pressure to find a place to watch, food to eat and friends to watch it with goes away. Whether students are going home to watch the game, sitting in their room watching the halftime show or catching the highlights of it all on Twitter, it is sure to be one fantastic Sunday. 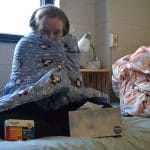 Campus cures for the flu