Super powers match up with real-life dramas in ‘Chronicle’

The basic premise of the new action film“Chronicle” is simple: teenagers develop telekinetic superpowers, and then actually behave like realistic teenagers.

They start by throwing things at each other and playing pranks. Their powers develop in strength and finesse, and eventually they are doing everything from lifting cars with their minds to flying around.

The characters are surprisingly compelling for being fairly typical high school aged protagonists—there’s the abused introvert, the popular guy and the conceited guy, which make for more than the normal hero-villain dichotomy.

The conflict rarely strays into the cartoonish angst that dominates teenage character pieces of late. However, once it escalates to actual, physical conflict, “Chronicle” presents some exceedingly good action sequences. It holds its own against every recent superhero movie and then some.

Of course, there is a bit of somewhat predictable behavior from the darker character. It is a traditional case of someone who’s been abused and never had any real power suddenly getting disproportionate amounts of power. This does not alienate him, and the side plot involving his sick mother and his abusive stepfather makes his side of the story all the more gripping.

What really makes the movie so worthwhile is its unconventional, grounded nature. There are no huge leaps of logic, vigilante escapades or schemes of world domination. They’re teenagers after all.

None of the characters ever really go far beyond believability, and even before they develop superpowers, they’re exceedingly average high school students. Everyone who’s been to high school can find someone who acts like these three teenage guys do.

While using the increasingly relevant habit of teenagers filming their lives for vlogs or posterity, “Chronicle” sticks to the “found footage” medium, cutting to other cameras or security footage when necessary, but always from a specific angle. This enables them to do two important things: Make the film more intimate by narrowing the scale, and cover up some of the occasionally sub-par visual effects.

Regardless of the side budget, the movie has a well-put-together presentation, and is one of the best “found footage” movies, as well as one of the finest superhero movies to date.

Chronicle is a great character study, and despite the occasional cheap graphics, excellently presented and definitely worth seeing. 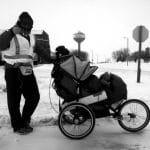