McGarvey, will feature a piece by composer James Syler in its upcoming concert.

Syler is a faculty member at the University of Texas. He will attend the concert to hear the symphonic band perform his piece, “The Hound of Heaven,” for which he won the prestigious Arnald Gabriel Composition Award.

The band will perform a variety of other pieces, including the traditional “Fanfare & Allegro” and funeral march “Trauersinfonie.” However, the highlight of the program, according to Professor McGarvey, will be “The Hound of Heaven.”

“There are serious pieces like ‘The Hound of Heaven’ and then celebratory pieces such as ‘Fanfare & Allegro.’”

“The Hound of Heaven” is based on an English poem by the same name written by Francis Thompson. It tells the story of a “hound chasing the hare,” which is analogous for God chasing after man. Throughout the piece, the man tries to find grace and happiness in worldly avenues such as nature, the stars or children. In the end, man realizes that the grace he seeks can only be found in God.

During the week leading up to the concert, Syler worked with NW band members on their songs and explained to them the story that his piece tells.

“The music inspires me, and I want people to be affected the same way,” McGarvey said. “My goal for the concert is to take the listeners on a journey.”

Other pieces that will be played by the band include “New Century Dawn,” “Circus Band” and “Imagine If You Will.” Each piece can be interpreted in many ways.

“Each piece has a story that goes along with it, and I am excited for the audience to listen and hear those unique stories,” alto saxophone player Audrey Wheeler said.

A variety of instruments will carry the melody and insure that everyone gets a chance to lead the band.

This will be the Symphonic Band’s second performance of the year.

“I’m looking forward to being able to play with my friends in this concert and showing my family the pieces we have been working on,” trumpet player Drew Lemke said. “It should be a lot of fun.”

Dean of students returns to roots 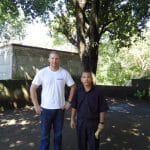 Punched in the empty stomach