The Arrival of Raider Women’s Basketball

After a wild basketball season last year, the NW Women’s basketball is back and ready for another exciting season. Last year, the women’s team ended their season at nationals in Indiana.

“Even though we didn’t end how we planned we came away from that game with a new hunger and passion to both be and get better! We embraced the model of working while we waited for the next season,” Schany said.

The team believes they have a bright future ahead of them for this upcoming season, although practices have just begun.

The Raiders have proven they have brilliant teamwork and rely on one another. Schany is excited that the team is physically prepared to start the season strong.

“It is always a little challenging at the beginning of the season with learning to play and mesh with different people on the floor and in the gym, however, I believe that the transition has been very smooth for both freshmen and the returners,” she explained.

The team’s trustworthy culture defines how they interact with their coaches and teammates. It has set a strong foundation for how they compete.

“Everyone is always looking out for each other which really helps build our team chemistry. Doing so, I believe the team has established a solid bond of friendships both on and off the court!”

Team dynamics are not the only thing that will help to bring the team to success. Both the team and the coaches are preparing with intensity and consistency for this upcoming season.

“We have been working very hard since the end of last season to prepare us forward. This included individual and group workouts in the post and preseason, weekly lifting, and we have been practicing officially for a few weeks now,” Danner said.

She affirmed how the coaches, and the team are both working towards “the standard of excellence that this program and our fans expect and deserve.”

The women’s team was picked fourth in the GPAC standings this year with a 2- point difference between second and fourth place. The Raiders have very high hopes for the future to come. 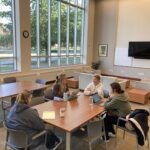