Sfumato means “gone up in smoke.” It is a painting technique Leonardo da Vinci used while painting the “Mona Lisa.” Matt and Mark Slemps named their pizzeria after the word because they make all their pizzas in a 900-degree, Italian, wood-burning oven.

“It goes well because it’s a smoky technique,” Matt said.

At Sfumato Pizzeria, a pizza can be made in two-and-a-half minutes. It takes a minute to prepare the pizza and then 90 seconds to cook it.

Sfumato aims to create authentic Neapolitan pizzas with fresh ingredients. All the pizzas are made from Sfumato’s own dough and fresh, homemade mozzarella cheese. Instead of using sauce on the pizza, Sfumato uses fresh herbs, crushed tomatoes and olive oil.

Sfumato is also a healthier option than other restaurant chains because it does not use any preservatives. The ingredients are either bought locally or homemade. The menu reads “Sanitas per escam,” which is Latin for “health through food.”

The pizzas resemble the typical Americanized pizza that most people are used to, yet they have a unique spin of freshness and exceptional flavor.

“My favorite pizza is the Margherita,” Matt said. “It is a classic pizza that has been around for 400 years.”

In addition to these Neapolitan pizzas, Sfumato serves a house salad with homemade dressing and a variety of drinks, including crafted sodas.

Matt and his father, Mark, decided to open the restaurant after they bought the oven.

“We got the oven to do the artisan bread, and we had the building for years and decided to turn it into a restaurant,” Mark said.

It took the Slemps about a year to open the restaurant. Matt said there are difficulties involved in opening a business in small-town northwest Iowa.

The hard work and perseverance paid off because now they own and operate Sfumato Pizzeria, located in Carnes, a small town about seven miles south of Orange City.

Sfumato is certified from Verace Pizza Napoletana. This certification is only given to pizzerias that meet strict requirements when it comes to preparing and cooking Neapolitan pizza.

Sfumato is the only Verace Pizza Napoletana pizzeria in the northwest Iowa area. Prior to its opening, the closest one was in Omaha, Neb.

Sfumato has a capacity of 35 people. It has a rustic and intimate setting.

Despite the small capacity, Sfumato accomodates many customers throughout the evening.

“You meet a lot of people,” Matt said.

He added that this was one of his favorite aspects about operating a restaurant. 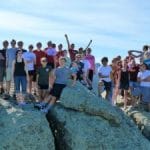