The election is here

For many students, this year presents their first opportunity to vote.

“It is important for me to vote,” said junior Rachel Muilenburg. “If I don’t vote in this election I won’t vote for the president until I’m 24.”

Many students may want to vote but are not quite sure how to do so. To vote, one needs to be registered. Many people register to vote when they renew their driver’s license at age 18. If not, people can download the online form, fill it out and mail it to their state or local election office.

Everyone is required to vote in his or her city or town. This is because voting for local and state governments also takes place on Election Day. Some states, including Iowa, allow college students to vote in the state where they attend school.

For those students who cannot go home to vote and do not want to re-register, absentee ballot voting is an option. Some states require a specific reason for requesting an absentee ballot, but Iowa does not.

“Part of the reason for early voting is to increase participation,” said political science professor Jeff VanDerWerff. “Only about three in five eligible voters will cast their vote.”

Since Election Day is fast approaching, it may be too late to request an absentee ballot, although it does not hurt to try. Students can go online to search for their local government office and then contact them to see if there is still time to request a ballot. Absentee ballots must be postmarked on Nov. 5 or submitted by the time the polls close on Election Day.

Students who are registered voters in Orange City can go to the polls on Election Day. Orange City is divided into two precincts. The residents living on the east side of Orange City will vote in the basement of the town hall, while those living on the west side vote at New Hope Church.

Many students may still be contemplating who to vote for. In that case, there is still a little time to do some research and become an educated voter.

“When I think about voting I realize that it is not about one person,” said senior political science major Natasha Fernando. “It’s about everyone; what is greater for the common good.”

“Neither candidate is perfect,” VanDerWerff said. “There are many things that should cause you to pause and think about how you vote. Every person has reasons for voting the way they do.”

Many students on campus think that it is important to cast their vote on Election Day because it is their democratic right.

“We live in a free country, so we have the right to vote,” Fernando said. “It’s a chance for us to have our voices heard and participate. If everyone thought that and voted, we would see change.”

There will be a campus-wide election-watch party at the RSC TV beginning at 7 p.m. until the majority of the results are in on Tuesday, Nov. 6. 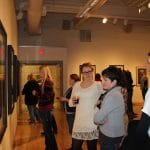