Trust in God and a deep love of people

Rebekah Stoscher is a senior art therapy major from Albania, a small country neighboring Greece and Italy of about 3 million. She’s part of a missionary family who has taken in 10 permanent foster children. She found her way to Northwestern through her older biological sister, AJ Stoscher, who graduated with a theatre degree the year before Rebekah started as a nursing major. Now, her younger biological brother James has followed both of his older sisters here as well.

Stoscher started out as a nursing major quite determined in the career choice she had started. She admires nurses for what they do, especially in the aspect of being an emotional support for their patients. This is what drew her to become one herself, to be able to support people mentally, emotionally and spiritually through the tough times.

While in the nursing major, she learned about Shalom, caring about the whole person in mind, body and spirit. Even though it was getting Stoscher closer to a career embedded with caretaking, it was a large challenge that pushed her more into fear multiple times.

Stoscher said, “I stuck with nursing for so long because I didn’t want to feel like I failed or quit just because it was hard.”

During the quarantine of spring semester 2020, Stoscher faced the question of switching majors.

“I was quite determined that I was going to be a nurse,” Stoscher said. “But I guess God wasn’t in on the plan.”

After much prayer and help to make the decision from her family, Stoscher decided to switch from nursing to art therapy.

“It was honestly a blessing to be able to pray with my parents about it and have their support,” said Stoscher.

She now hopes to use art to help people through their trauma and life struggles. She’ll be taking a fifth year in order to finish her new major.

When considering the time she has had here at Northwestern, Stoscher is welcoming the fifth year in her schooling in order to spend more time exploring her gifts and find out the steps God wants her to take.

In her efforts to use art as a form of worship, she reflects the mission statement of Northwestern’s theatre department, “To the King!”, in her work.

When asked why she enjoys art, Stoscher said, “It gives people joy and brings them together, as well as using creative talents to bring glory to God.”

During her time here, she has enjoyed working with all the different aspects of a theatrical production, from acting to building the sets. Since her major switch this past year, she has also enjoyed improving her drawing, painting and sculpting skills.

Stoscher will be taking her fifth year on campus to both look to the future and do her best to bless those around her. She’ll be looking into graduate schools in order to get the proper certification for art therapy.

“The future is unknown and a bit scary, but I am trusting God through it all. I am open to whatever He wants to teach me.” 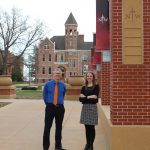