Now is the time of year when a plethora of emails about winter weather advisories or parking are sent out in order to keep students protected. We read the email with a groan, knowing that there’s a storm coming. But care is shown through the reminders. Andrew Van Ommeren is in charge of tasks like this as director of campus safety and security.

Van Ommeren started at Northwestern in the fall of 2015 and is currently in his fourth year at NW. He partners with local law enforcement in regard to crimes or concerns surrounding campus, communicates with students who have called problems to attention, supervises campus employment in locking and unlocking facilities, is in charge of active shooter training and fulfills many more important obligations.

One of his coworkers, Julie Elliot, is grateful for his leadership. “He’s worked hard to educate himself on the needs of our campus and on the requirements of the federal government when it comes to campus safety,” she said.

NW is the number one safest college campus in Iowa, according to niche.com. This well-known fact is also what Van Ommeren finds to be the biggest obstacle of his position. “It can create a culture that can defeat self-awareness one should consider when thinking about one’s safety and security,” he said. Even just something as simple as remembering to hit the button at the crosswalk is an act of campus safety students can put into action themselves.

Van Ommeren wants to “provide a reasonably safe campus in which students feel safe and that allows them to focus on their journey in faith and studies.”  Students are actually his favorite part of the job and the reason he came to NW. Van Ommeren wanted the opportunity to build relationships with college students while providing an important service to a college community. Specifically, he said he appreciates NW because it “prepares students in a journey with God that moves in all areas of life.”

As a ’95 graduate of NW, Van Ommeren knows exactly how fostering the community can be. He and his wife, Deb, have two children together; eldest daughter Halley, who is married with a daughter, Ariana and his youngest, who  is currently serving one year as short-term staff for a mission organization in Mexico and plans to attend NW this fall. During his free time, he enjoys bike riding, basketball, reading and the Minnesota Vikings.

Along with his part-time role as director of campus safety and security, he works as a substance abuse disorder counselor for an agency called Compass Pointe in Spencer, Iowa. Van Ommeren has been learning in both positions “how easy it can be to go through the motions in life, and in doing so, it becomes easier and easier to listen to the messages of this world and miss where God may be leading.”

He wants to encourage every student on campus to be grounded in God, His word, His direction and His commands.

Remember to thank Andrew Van Ommeren and the countless people on snow crew this week for the open pathways that are truly a blessing. 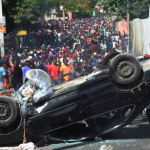