The Special Olympics program is holding a track and field meet April 20 at Dordt College. Northwestern students have been involved in helping with the training process. Freshman BJ Groskreutz and Senior Rick Te Grootenhuis are among the volunteers.

The athletes will compete in running, throwing and jumping events.

Te Grootenhuis decided to volunteer this year because he always had conflicting schedules and could not help in the past.

“It was a spur-of-the-moment decision,” Te Grootenhuis said. “I feel blessed with this opportunity, and I reflect on that and try more in the opportunities that I have been given.”

Groskreutz said he works on basic technique with the athletes and runs beside them for encouragement.

Groskreutz and Te Grootenhuis said they saw a difference in the athletes after the college students started helping.

“The teacher told us that one of the kids ran a 200-meter and lay on their back after finishing because they didn’t want to participate” Groskreutz said. “After the college kids came to help, the athletes were way more motivated, and they wanted to impress us.”

“One of the girls didn’t like practice, and now she runs and jogs with us always,” Te Grootenhuis said. “It was cool to see.”

Helping the athletes train for the track meet has been a positive experience for Groskreutz.

“The smiles on their faces make you so happy,” Groskreutz said. “The kids are so genuine about what they say. They are themselves, even when they are trying to impress you.”

Te Grootenhuis said he gives a lot of encouragement. He also gives the athletes basic improvements on their technique.

“I motivate them so they believe that they can do it,” Te Grootenhuis said. “I try to encourage them by running beside them and saying they can do it.”

Groskreutz has two younger siblings, Carter and Anna, that both have Down syndrome. He said he has developed a heart for helping because he has seen negative sides of the syndrome from others.

“I cringe at the word ‘retard,’” Groskreutz said. “Kids would scoot over after they realized they were sitting by Carter and Anna. It is sad that society has those views.”

Groskreutz said his younger brother Carter went up and hugged a drunken man who was walking past his house. His family was playing baseball in the backyard. The man then stopped and talked about baseball with everyone.

“Who knows, Carter might have changed his life,” Groskreutz said. “None of us would have gone up and hugged a person we didn’t know.”

Freshman Keegan Mulder has also had experience in helping with the Special Olympics program. This year he helped a group of 65 and older women learn basketball drills and techniques.

Mulder helped the basketball athletes by bringing them from station to station during practice and keeping track of their progress. He said he enjoyed the mentality the women had.

“They made their own encouragement,” Mulder said. “It rubbed off on me, and the high-fives and hugs were contagious. Everyone wanted everyone to win.”

Mulder said what he brought away from the experience was joy. He hopes to carry that joy into all of his life situations, and it changed his view on sports.

“It is not overly important to win,” Mulder said. “I learned that it is important to love your opponents while still being competitive.”

The volunteers said they have a different perspective after getting involved in the track meet. They hope to have more opportunities to help in the future.

“Don’t shy away, the athletes are a lot of fun,” Groskreutz said.

“I am hoping the athletes realize they can do anything,” Te Grootenhuis said. “They don’t have to be limited.”

Any students who would like to volunteer for any Special Olympic events in the future can contact Peg Koele penn@mtcnet.net. The track meet is from 8:45 a.m. to 1 p.m. for anyone wishing to watch. 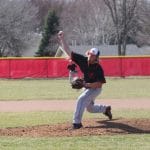 Stuerman named pitcher of the week