Wick’s return does not disappoint

John Wick is back. The gritty, wide-shot action sequences do not disappoint. Keanu Reeves proves to many that he can still bring Matrix-quality stunt work to his performances. For a time, I began to get used to Keanu’s role’s as run-of-the-mill performances of masculinity, such as that in “The Neon Demon.” Keanu makes use of the grueling four months of training prior to filming and brings true stunt work to his role in “John Wick: Chapter Two” with over 90 percent of the action completed by him without a stunt double.

There were moments when I was treated with a main character that was not impervious to oncoming assaults, like most action films to date display. Although it borders on being cartoony at times, I am willing to forgive that for the sake of the world that truly opened up from a simple mystery to a sophisticated network of secrecy.

It is extremely rare that a second film adds much to any franchise other than a set-up for a third film. In a world of extreme action franchises like “Mission Impossible,” “Jack Reacher,” “Bourne” and “Fast and Furious,” “John Wick” takes world-building to a new level. “Chapter Two” proved that John Wick can pack a punch as well as deepen a mythology in innovative ways. Audience members get the chance to feel the history behind John Wick’s past as well as the famous Hotel’s code of conduct that mystified viewers in the first film.

Set in Rome, the culture and artistic expressions of an ancient past is mixed with technology from World War II and present-day tech. The incorporation of Roman mythology makes every setpiece vibrant, unique and builds the world from small details like lamps, statues and set designs.

Apart from the sleek technical aspects of the filming process, I was astounded by the incorporation of subtitles from a multiplicity of languages that normally are not given screen time, let alone built into the film. The English subtitles feel as if they are natural to the film, as the text-design pops out to the reader with differing fonts and flashes of color. This is a detail many directors struggle to convey well, but director Chad Stahelski uses the text to convey emotional meaning about the states our characters are in without the text being obtuse and clunky. Shots that deserve emotional depth are not coated with hyper-masculine expressions of strength. Instead, the set’s detail brings in elements that propel our understanding of the characters, like the grittiness of rain on wood or the different drinks that are ordered to convey tension.

The sleek, technical camerawork, use of world-building details and character tension are all brought to life in innovative and intriguing ways. “John Wick: Chapter Two” proves that stunt work is not lost in a world of digital effects. The film also proves that elements of history can be displayed in all their eccentricity to propel the plot and character development. Incorporating a multiplicity of innovative techniques lets the “John Wick” franchise stand out from most other action films and makes me excited for a third installment in this series. 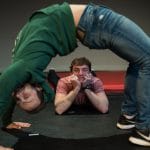