Northwestern’s head basketball coach Chris Yaw announced his resignation after the team’s trip to the GPAC national tournament. The team went 18-11 in Coach Yaw’s season, with a slow start the Raiders were able to end strong and make it to the national tournament.

After being head coach for 10 seasons, Coach Yaw has made the final decision to step down from the position. Although, Yaw has made his mark in NW women’s basketball. He is ranked second in the program’s all-time list for both wins and win percentage, finishing his career with a 224-96 overall record.

There have been many memories made in his 10 years coaching.

“I have been extremely fortunate to have gotten to work alongside and coach some outstanding people,” Yaw said. “The conversations and relationships with these people are the special part about coaching. There are big games, moments and seasons that are highlights as well but, in the end, it is the people that you are able to share the experiences with that make it worthwhile.”

Coach Yaw had nothing but great things to say about his last season as head coach. He is incredibly proud of where they had finished and the growth throughout the team.

“Having that improvement end in an opportunity to compete in the national tournament is special,” he said. “I believe there is a good sense of accomplishment and achievement for the team. I pray that they all recognize, regardless of their individual roles, how much they each contributed to such a memorable season!”

Northwestern qualified for the GPAC tournament in each of Yaw’s 10 seasons, finishing among the top five in one of the most competitive conferences in the NAIA eight times.

“Coach Yaw has been a blessing to the Red Raider Athletics. He has accomplished a lot as a positive role model who impacted many student athletes, NW vice president of athletics Dr. Micah Parker said. “I am sad I only got the pleasure of working with him for a single season. He will be the standard by which we look for another head coach.”

Yaw will be greatly missed by the NW athletics.

“I am humbled and grateful to have been able to serve NW in this role. There have been numerous mentors in my life that allowed this to be rewarding and successful experience,” Yaw said. “My hope is that I have been able to impact the people in our basketball program and others on campus in a way comparable to how the experience has impacted me and my family.” 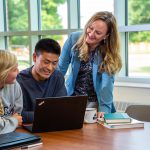 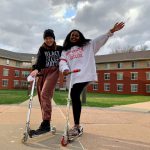