Another zombie apocalypse has come and gone here at Northwestern, but this year was an early arrival. Instead of occurring during the spring semester, Humans vs. Zombies took place October 9-14, ushering in spooky season on campus.

Each year, Humans vs. Zombies has the objective of humans not turning into zombies. One student is secretly nominated to become the original zombie while everyone else’s goal is to survive the “apocalypse” by not getting tagged. Senior Chloe Tschetter was chosen as the game’s original zombie this year, sent off with the mission of infecting others.

Some classic elements of the game motivate people to keep participating in it. It is the one week of the school year in which the monotony of routine is interrupted by people with bandanas sprinting across the campus green, keeping a close eye on building entrances and defending themselves with Nerf bullets and balls of socks. “I enjoy the adrenaline of walking around campus always looking over your shoulder and being able to shoot random people on campus with Nerf guns” senior Josh Thomas said. “It makes a normally regular school week a lot of fun.”

The game adds much excitement (and stress) to a week for those that play. Some students that would normally play were deterred from doing so this year with it taking place during midterms week. Several students went for it anyway, with varying motivations. “The week was already going to be stressful with midterms, so I figured, why not increase my heart rate even more with an apocalypse?” sophomore Elena Lee said.

“This was my first year doing Humans vs. Zombies. My brother had told me all about it last year and how he survived, so I couldn’t ruin the family’s perfect record!” freshman Coltin Vargas said. His brother, Gunner, said “I chose to participate this year because I wanted a second win under my belt. Also, I just love the game and the friendships that you build.”

One highly appreciated element of the game is how it brings people together. “Many of the people that play the game are people I don’t regularly talk to, so being able to sneak into a building and see someone else wearing a bandana around the leg or arm and ask them how it’s going is always a unique conversation to have” Thomas said.

“I met people that I would never have talked to because of Humans vs. Zombies, and I’m hoping to meet some more people during the next outbreak” freshman AJ Bomgaars said.

The possibility for excitement and connections encourages players to return, while elements are added to the game each year to keep it fresh. A twist from this year was the addition of faculty “doctors” that could revive zombies. By the end of the week, 16 humans remained alive. Humans vs. Zombies continues to be a favorite campus tradition, enjoyed by both players and bystanders. A woman of many instruments shares her dreams 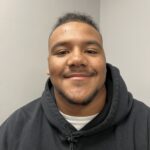