Finding your future spouse in college is a dream come true for many. Imagine not only finding your spouse, but also working together at the same workplace in the same department.

Dr. Reed and Dr. Erin Mueller are new professors working in the psychology department. They both have their doctorates in clinical psychology.

Erin grew up in Eastern Iowa. For her undergraduate degree, she attended the University of Iowa for psychology.

Reed Mueller grew up in the Pacific Northwest and proclaims that he lived most of his life in the woods somewhere. Growing up, he witnessed struggles in his own life and in others’ lives. In the process of trying to understand where struggles come from and how It could get resolved, he wondered how to pursue the answer to life’s struggle – human suffering. Reed was stuck on three possible pursuits when going for his undergraduate degree: theology, philosophy, or psychology. Ultimately, he chose to go for psychology and minor in biblical studies. Reed decided to achieve a higher education in psychology because he felt that psychology pursued truth through the empirical method, which is something he highly values. Walking alongside Reed was an admired professor who also had an interest in clinical psychology and theology, and Reed followed his professor’s footsteps and attended graduate school in Utah at Brigham Young University.

Outside of being a professor, he enjoys spending time outdoors. One of his favorite things to do is to kayak and fish in a quiet lake which he could do this for hours and days on end. Erin interjected and said “it sounds like it’s a kayak for one.”.

Overall, Reed says that he is the man that he is today because of the care and intentionality that others have put in his life, and that he didn’t get here on his own.

Erin and Reed met each other at Brigham Young University. BYU is affiliated with The Church of Jesus Christ of Latter-day Saints. That being said, many of their colleagues were already married and had children. Within the college, there was a group of mostly singles, which they were a part of. They hung out together often as friends, but their relationship slowly blossomed from there.

They dated for roughly three years, were engaged for four months, and got married in 1997.

After getting married, Erin practiced for ten years in a variety of settings as a clinical psychologist, but she focused most of her work with children and families dealing with various behavioral, emotional and developmental issues. Erin conducted psychological assessments and did psychotherapy to help address and overcome these challenges. She also worked in a children’s hospital, community mental health center and schools. If that wasn’t enough, she also did applied research for grant-funded programs that served children and families. After a while, she decided to go into teaching in 2007.

“It was fun to apply what I did in training and practicing and bring it to the college classroom.” Erin said. “I can use them as examples and help students apply psychological theories and principles to whatever career path they’re on.”

When she feels like she needs to rejuvenate the content, she thinks back to her professor that inspired her to pursue psychology because it could set the career trajectory of any student. She taught at Concordia University-Portland for 14 years, teaching a variety of courses in the psychology department and advised numerous student theses.

Before Reed went into teaching, he was a founding partner in a consulting firm which helps programs better meet the needs of individuals and communities. He found the work he did to be very rewarding because he was able to help programs evaluate their outcomes and make improvements to those they served; students, at-risk youth and parents in search of guidance and support. From his experience in clinical psychology, he was able to serve others easily. It was focused more as a prevention rather than therapy and served at a community or group level compared to an individual level. Reed eventually served as professor and chair of social and behavioral sciences at Concordia University-Portland before the college closed in 2020 after the Lutheran Church-Missouri Synod withdrew its funding.

Dr. Erin And Dr. Reed Mueller never imagined that there would be two positions open in the psychology department, let alone in Erin’s home state. When the Concordia campus closed, Dr. Feenstra, psychology professor at NW, reached out and contacted the department chair of Concordia, Reed, about a position that was open at NW.

Erin was going to follow up with Dr. Feenstra before COVID-19 made its mark across the world. The following year, they were contacted again that the search was still on for not just one, but two positions.

“The consistency of the quality of teaching across all of the different departments was something that made Northwestern stand out,” Erin said. “Northwestern’s leadership, vision, faculty and students was encouraging.” When an opportunity like that arises, Reed knew needed to explore it.

Erin is looking forward to getting to know the students inside and outside the classroom.

“Being a piece to their puzzle for the next few years is fulfilling. Walking alongside to not only teach and instruct, but to also support and help them discern their future is a joy in itself,” Erin said.

Reed is looking forward to seeing where graduated students take their journey after NW.

Now, the Muellers are working together again, but in a new place. When asked what it’s like to work with spouse, they both shyly looked at each other, until Erin mentioned that, “Since we’ve been doing it for a long time now, we’ve gotten the hang of things. We get to fellowship together – at work and at home,” Erin said after glancing at Reed.

“The shared work experience allows us to more deeply engage with the students,” Reed said. 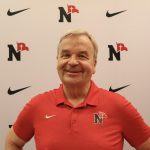 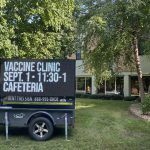