This was another busy week for the Raiders, who started off with a strong 3-1 win Saturday at Oskaloosa against William Penn. They followed the success with 3-2 loss to Central College on Tuesday.

In the Raider loss to Central, possession was in favor of Northwestern. The game’s momentum was toward NW as they consistently moved the ball foward. However, the majority of balls moving forward didn’t find feet, and the passes through the midfield were not connecting.

Freshman Mattie Ostrowski tied the game at 1-1 in the 9th minute with an assist from fellow freshman Michaela Gibson.

After Central scored in the 52nd minute, freshman Nikki Zika finished sophomore Tyler Farr’s pass to knot the contest at 2-2.

A goal in the last 30 seconds of the game dropped NW.

“I think that we were the better team in this game,” said junior Caiti Shaw, “but the score did not show it.”

In the William Penn game, Zika scored the first goal of her collegiate career in the 38th minute.

After  William Penn scored just after halftime, Farr answered back with two goals to make the score 3-1 in the 70th and 89th minutes.

“The team’s passes were really starting to connect,” Shaw said, “and no one player stood out, but everyone all played as one.”

The offense of NW got 18 shots off, and William Penn was only able to get nine attempts on goal.

Even though the Raiders were not prepared for playing on the turf and lacked ball control, they found a way to keep possession and create scoring opportunities.

The Raiders had a spectacular week from junior goalkeeper Ariel Watts, who won GPAC Defensive Player of the Week for Sept. 12-18. She allowed one goal with 12 saves in the William Penn and College of Saint Mary’s wins.

The team’s record is now 3-3-1. The team will play again at 5 p.m. tomorrow in Orange City against Nebraska Wesleyan in their opening GPAC game. 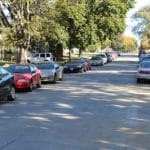