For many athletes at Northwestern, participating in one sport is enough of a strain on their time. Even so, a select few student-athletes choose to compete in multiple sports.
Sophomore Davis Bloemendaal is one of them. The football and baseball player is in his second season doing both sports and currently starts for both squads.
As an impact player on two fields, Bloemendaal believes that both coaching staffs encouraged him to try two sports, and respect what each other are getting out of him as an athlete.
“[Head coaches] Actherhoff and Wede work with me and make sure that I’m staying caught up on what’s happening in the offseason for one while I’m inseason for the other,” Bloemendaal said.
Sophomore Alli Dunkelberger also has seen success in two fields of competition, earning all-GPAC honors for soccer and playing in last year’s  national basketball championship game. She points to the relational aspect as one of the blessings.
“Getting to know the people not just on one team, but I get to do that with two is awesome,” Dunkelberger said.
Junior Eli Groenendyk took a different route to playing two sports. After being a member solely of the basketball team his first two years, he joined the football team this fall.
“I didn’t want to do two sports because that might have been too overwhelming,” Groenendyk said. “I needed to take care of academics and establishing friends first and foremost.”
The love of the game, which draws most athletes to multi-sport competition, brought him back to the gridiron this fall.
“I still loved playing football,” Groenendyk said. “I missed routes and catching passes, so I decided to give it a go.”
Junior Noah Bohlmann offers a different perspective, as one of the many students on campus who originally signed to play two sports, but came to the decision that he needed to focus on just one. Bohlmann signed to play soccer and baseball at NW, but now only competes on the diamond as a pitcher and third baseman.
“It really came down to which one I saw myself doing the best in,” Bohlmann said, “and which one I saw myself helping the team most. I just saw myself contributing long-term to the guys on the baseball team. ”
He also pointed out playing baseball for longer  puts the sport as his first love above soccer, which he also said “was what the decision ultimately came down to.”
All four athletes believed they would not be able to play two sports and succeed in academics without two things. The first is time management, and the second was a true love of both games. 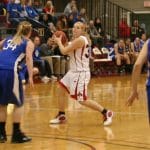