In this movie directed by Neil Burger, a crew of astronauts on a multi-generational mission descend into paranoia and madness, returning to their primitive natures. While it’s a space movie that tackles interesting themes, Voyagers remains in familiar outer-space.

The movie is an attempt to explore the theme of human nature. As the crew descends into chaos, they also revert to primitive impulses. Tribes are formed and power struggles occur as violence escalates. This situation is similar to the classic novel “Lord of the Flies” by William Golding. This theme is one that has been explored and developed through film history. In this movie, however, all the attempts to tackle this theme fail at adding any new depths.

As the plot begins to unfold, the characters revert to violent, impulsive states and the movie brings into question the true nature of human behavior. Different characters serve as a variety of possible answers to this question. However, in trying to answer the central theme of the movie, the characters become one-dimensional. The different tribes basically are the “good guys” and the “bad guys.” It would have been more interesting to see both tribes exhibit good and bad traits in an attempt to have layered and more complex characters.

The movie stars Tye Sheridan and Lily Rose Depp. They offer decent performances, considering what they are given to work with. Fionn Whitehead plays the antagonist and is probably the most interesting character in the movie until he becomes a cliché villain.

The cinematography in this movie also fails to impress. Given it is a space movie, audiences are expecting great visuals that do justice to the genre. Cinematographer Enrique Chediak delivers a very average take behind the camera, never once being able to offer a memorable shot. Cinematography is one the biggest strengths of space movies, and this one falls short.

The movie nonetheless took more chances in editing than in cinematography. Unfortunately, the editing in this movie is confusing and even pretentious. At times shots are cut at weird moments and other shots start seemingly out of nowhere. There are also spliced stock footage shots of nature and other visuals that are supposed to represent what is going on inside the characters as the movie progresses. However, the latter attempt is laughable and very out of place.

The pacing in this movie also has some issues in the first half. The time is spent setting up plot points for the second half in very obvious and unimaginative ways. Instead of intriguing and drawing in the viewer, the setup causes the first half to drag. Coupled with the less than stellar editing, the first half of the movie not only drags but is also uninteresting. The second half of the movie is more enjoyable as the plot ramps up and the core story and themes of the movie are developed. However, a lot of the setup is wasted on cliché reveals and disappointing choices by the director.

The movie does however offer an interesting premise that can entertain viewers, even if it is at shallow depths. Action sequences are brutal and engaging. There is also a good amount of tension building in the second half that draws in the audience successfully.

Voyagers is a space movie that never dared to venture into unknown territories. Even with a good cast and decent performances, the movie struggles to reach any meaningful stages. Unimpressive cinematography and terrible editing make the movie a lot more average than it should have been. The premise might be enough to draw viewers in but most will be left unsatisfied as the movie promised more than it could deliver. Voyagers is another take on a familiar story that never quite manages to become anything to make it stand out. 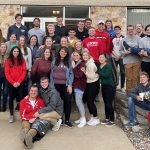