I didn’t know what to expect when first listening to Coldplay’s newest album, “Music of the Spheres.” I grew up with the British rock band, from “Parachutes”, the lullaby of 2000, to “Everyday Life,” the segue into 2020. Open to experimentation, Coldplay has released a diverse range of albums and tracks over the past 20 years, darting in and out of alternative rock and manipulating Chris Martin’s unceasing piano magic and classical touches in ways that have become unique to the band alone. Anything could be happening with this new album.

At first, there is a vague familiarity between “Music of the Spheres” and past albums. The first track, named a symbol of a planet rather than an actual title, is almost identical with the audio of “Always In My Head,” the first song in 2014’s album, “Ghost Stories.” It melts straight into “Higher Power,” one of the top hits of the album equivalent to “A Sky Full of Stars,” or “Something Just Like This.”

However, there is more obviously a stark contrast between “Music of the Spheres” and Coldplay’s earlier works. The band is known for its combination of popular aesthetics and classical instruments, and for this reason, the band is well loved by both younger and older generations. “Viva La Vida,” for instance, one of Coldplay’s most well known songs, combines the drama of an orchestra with upbeat lyrics and chords.

“Music of the Spheres” is very different from “Every Day Life,” released in 2019. The collection of what seems like demo recordings features mostly slow, calm and even melancholy songs. Its organic composure is accompanied by an array of strings, acoustic guitar, piano and choir. It is a stark contrast to “Music of the Spheres,” which accentuates more of a technological style. There is a surprising lack of strings, or anything classical or acoustic in this album. “Even Let Somebody Go,” one of the slower songs in the album featuring Selena Gomez, sounds like a Roland keyboard with the 90s bell synthesizer setting is being used.

For many, this album seems too drastic of a change from the wonders of Coldplay’s earlier works. Though I appreciate when bands are able to broaden their horizons, (or solar systems), “Music Of the Spheres” almost seems like a step backwards. The songs didn’t catch me the same way past albums did, though many of them grew on me.

The overarching theme of this album seems obvious space. It’s everywhere; in the titles of the tracks and lyrics. The band has even gone as far as to create its own little fictional solar system. “I loved you to the moon and back again,” and “You are my Universe,” are some of many lyrics relating to the heavens. The beginning of Biutyful manipulates Martin’s voice to sound almost alien-like and Coloratura sounds like something straight out of Wall-E. Stars are the topic of conversation in many of the songs and each track melts into the next with celestial ambience.

What people might not notice, however, is that outer space isn’t the point of the album. This is not unexpected. Coldplay has always expressed wonder and love for the world, and this astronomical themed album is no different.  “My Universe,” throwing it back with 2010s synth, relates the importance of a single person to the universe. “Human Heart,” as the name suggests, emphasizes the fragility of the human heart. “My human heart, only got a human heart, I wish it didn’t run away, I wish it didn’t fall apart…” The song Humankind highlights the word “kind.” “We’re only human, but from another planet, still they call us humankind.” Martin emphasizes his humanness from an outside perspective looking in.

Whether it’s an alien, a deity, or the universe itself, Coldplay flips the wonder of space right back to planet Earth with the out-of-this-world experience that is “Music of the Spheres.” 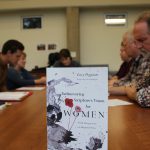