‘Antigone’ tells a story of sand and sadness The war has just ended and the city of Thebes is left demolished. Pillars have fallen, buildings are ruined, and the people are trying to live in a post-apocalyptic world filled with sand and sadness.

This is where the stage for Northwestern’s “Antigone” is set.

“This play is about an individual struggling with the government and … the tensions between family and authority,” Dr. Robert Hubbard, director of “Antigone,” said.

Professor Jonathan Sabo designed a set that captures the post-apocalyptic world by building ruins littered with bullet holes and tents instead of buildings because everything has been knocked down. To add to the post-wartime feeling, props master Jana Latchaw scattered the set with arms and legs. The costumes for the show, designed by Amber Huizenga, look as if they actually went through a war; they have been ripped, burned, thrown in the mud and rubbed against trees.

Between the three designs, they created a wonderfully visual world that captures its audience’s attention. Senior Katherine Eick adds to the post-war barrenness of Thebes with her lighting design that shows both the heat of the desert wasteland and the sickness that wars bring. Professor Drew Schmidt was given the task of designing projections for the show. Projections have been used before in shows at NW, but they are uncommon. Despite the novelty, Hubbard said that Schmidt’s designs are visually exciting.

Antigone (Honna Brown) and her sister Ismene (Tiffany Hach) return home after a war ravages their homeland. When Antigone gets there, she finds that her brothers are dead. Antigone sets out to right a wrong and, in the process, defies her uncle and king, Croan (Jackson Nickolay). This allows the stage to be set for all manners of tragedy.

“[The chorus] directly engages the audience and has a lot of really cool visual rituals,” Hubbard said.

Hubbard said that audiences of “Antigone,” originally written by Sophocles in 441 BC, can still connect to the play because “they see things in it that they can relate to, such as the universality of its themes. We always can identify with an individual struggling against the government. And tensions between an individual and family are universal.”

Avril Lavigne will never grow up 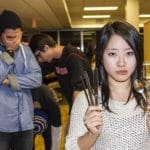