The Northwestern men’s basketball earned their first win of the season against Peru State last Tuesday by a score of 77-66.

NW fell to an early deficit as Peru State jumped out to a 7-0 lead. NW answered with a 10-2 run sparked by baskets from freshman Christian Korver and senior Jordan Baker. The Red Raiders built up as much as a five point lead, but Peru State went on a run to trim the Raider down to one point with 3:26 left in the first half. NW finished the half on a 6-0 run to take a 35-28 lead into halftime.

NW opened up the half with four straight points on a pair of free throws by junior Nathan Wedel and a basket by senior Justin Van Kalsbeek as the team built up a 20 point lead in the second half, 54-34. Korver hit three three-pointers during that stretch and the Raider defense limited Peru State to six points during the nine-minute stretch.

Head coach Kris Korver was pleased with his team’s performance.

“I think our guys played really well, we felt like we gave one away against Dakota State and I feel like they responded well,” Korver said. “We had a lot of guys step up and have big games in a situation where we needed them to.”

NW will next play Jamestown and Valley City State, both at home, on Nov. 4 and Nov. 5 respectively. 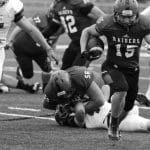