Although the cold weather in Iowa does not signal baseball season, the bats were warm in the opening series versus Columbia College (Missouri) last week. Northwestern traveled to Topeka, Kansas to open their season with a four-game series against Columbia. The Raiders split the series with the Cougars 2-2.

The first win of the new season came on a 6-4 victory last Wednesday. Columbia opened the game with a home run from Chase Urhahn. After the opening run, NW pitcher freshman Brady Roberts set down the rest of the order. NW earned their first run of the game in the bottom of the second as a single by junior first baseman Josh Fakkema brought junior Colton Harold home. Another RBI on the next at-bat by freshman right fielder Alex Fuhs gave the Raiders a 2-1 lead. NW extended their lead to four runs in the bottom of the third as junior shortstop Drew Schutt used a two-run shot to complement senior Austin Zylstra’s two-RBI double earlier in the inning.

NW had eight hits on the day, including a two-run home run to make it a 6-2 game heading into the fourth inning. Roberts earned the win, allowing three runs and striking out three. He also had a strong performance under pressure, as Columbia left seven runners on base. After six innings, senior pitcher A.J. Nitzschke entered to get his first save of the season. With runners on first and second, Nitzschke struck out Columbia’s Justin Randle. He earned the final out and the save with a flyout to left field.

“We did well. We split with Columbia College who is a really good team and was receiving votes last year. We are a young team, so as the season goes on, we will only get better,” Junior Zach Rosson said. “Consistency and not beating ourselves will be key to a successful season.”

The next series for NW will be this weekend, Feb. 22 and 23 in Marshall, Missouri as the Raiders face the Missouri Valley Vikings in a four-game series. Missouri Valley has a record of 2-4 this season. The first home series will be on March 2 when the Raiders host the Southwest Minnesota State Mustangs. 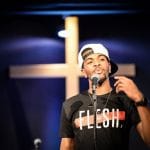 Brandon Leake to speak in chapel