Black History Month reminds America of the hard but beautiful history that belongs to African Americans. Many Africans were brought to the United States and held in bondage for multiple generations. The repercussions of these actions are still prevalent today. Black, Indigenous, People of Color (BIPOC)in this community are still being discriminated against. As Sioux County is 96.8% white, many discussions regarding race are uncomfortable for most. Sioux County’s proximity to diversity is far, but nonetheless, friendships and close connections can be built.

When Americans observe Black History Month, it offers citizens of all races the opportunity to learn about a past and of a people of which they may have little awareness. This also gives Black people the opportunity to share their narrative with their community.

NW has brought in various speakers, such as Sandra Van Opstal, Lisa Sharon Harper and Dominique Gilliard. Some people on campus have welcomed these lessons, while others have been more hesitant. Prior to each event on campus, a prayer or preface was given: listen with an open mind. By celebrating different cultures, we are celebrating God.

Another way NW has embraced the month is through Dr. Michael Andres’ class on reconciliation and redemption in Scripture, race and slavery. In that class, Andres assigns Jemar Tisby’s book, “Color of Compromise,” a book about the truth of the American church’s complicity in racism.

“[Tisby] is speaking prophetically about times when we’ve gotten God’s call to reconciliation,” Andres said. “When we’ve best embodied this is by also telling the truth about the many times that which we haven’t, and how we are called to be a part of His work.”

Due to the pressing nature of this topic, multiple conversations, seemingly in tension, are circulating around campus. One side believes that the speakers are attacking White people, while another side shows an eagerness for meaningful conversations and growth. However, the discomfort that students on both sides have experienced in the last month while listening to the speakers is a glimpse of what people of color face every day. The feelings experienced from comments, stares, microaggressions, biases and blatant racism does not compare to the small discomfort of engaging in challenging conversations.

Recently, MOC-Floyd Valley has run into blatant racism in the school districts. In
“The Capital Democrat,” MOC students spoke of “a classmate being called the n-word on the bus after school and being told to move” and when a black student was told she deserved to be “beaten like a slave.” While uncomfortable, these are still realities that are faced every day. That’s why a month such as Black History Month is important.

While Gilliard was at NW, he revealed the tension of addressing white privilege during his NED talk. He stirred up uncomfortable topics for a campus whose demographic remains mainly white, and spoke of how to leverage white privilege as a tool for missions. With the hopes of this, change can occur, and NW can shake away it’s comfortability with the status quo.

Faculty at NW are also hoping to continue to keep the conversation open regarding race.

“[Black History Month] should be acknowledged all year long,” Dr. Valerie Stokes said. “I just see it as faith integration.”

“Talking about BHM is a way to acknowledge who our Black brothers and sisters are, what they’ve endured, continue to endure and the beauty of diversity through their rich culture. BHM is a way of honoring the entire beloved community and how we can move forward in unity. I see BHM as one way to connect with one another and highlight the ways in which America needs to grow and learn from past mistakes together,” Draayer said. “Sometimes that means listening well and with a loving heart.”

As February ends, the conversation doesn’t have to. Opportunities to engage, to learn and to continue talking exist daily. NW can combat discrimination and degradation if the community faces their neighbors, acknowledges the experiences of each individual and become united in diversity. 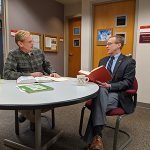 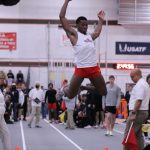