“The closest thing we’ve done is going to Des Moines over Christmas break to do improv at a youth gathering called Impact,” said junior Abe Klafter.

But this year the team is going to Ames.

“It’s mostly a joke because we’re just a bunch of college kids doing improv for the joy of it and I feel like ‘tour’ is a really serious thing. But we’re taking it on the road,” said sophomore Honna Brown.

Klafter agrees, “Tour is a really top shelf word. It’s taken on that name because it’s over spring break, right at the start. The show opportunity just came up, and we’re taking it.”

This isn’t the first show off-campus for the team of nine NW students.

“While on campus, we have shows once a month in various venues: the choir room, the theatre, Hospers stage, Windmill Park,” Klafter said. “Off-campus shows mainly occur in the spring, anywhere from three to six shows.”

They’re also starting a few new side projects. Most recently, members of the team have been preparing to teach improv to kids in the local area.

“There’s a certain teachability and lack of opportunities at that age,” Klafter said. “There’s certain gumption to do it on their own. High school students have theatre or speech; we want to provide something where the younger kids can get involved.”

Klafter and Brown see reaching out to the larger community as vital to the mission of the Black V team.

What’s the mission of the V?

“To praise God through the art of play,”Brown said. “And to give people the opportunity to learn how to do this and play with us. Play is taking a risk by putting an idea out on the stage and letting others take it and grapple with it and put themselves into it.”

The art of improv requires playing with a lot of different elements: team dynamics, characters, and audience interactions.

“You put all sorts of different ingredients into it,” Brown said. “You end up with a complete thing at the end that everyone loves.” 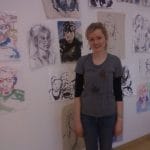 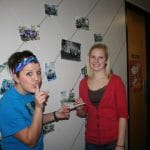