Home Community Bobcat attack, basketball and the Beacon has no home
Community In each issue, we’ll dig through the Beacon archives for hidden gems. Here’s what we found in this week’s excavation.

1923 Boys go hunting: One summer many years ago, a group of local boys went on a hunt for some wild bobcats, which had been reported on the outskirts of town. Two boys managed to corner one of the cats. They fired at the animal but only scared it up a tree. One boy climbed after it only to be attacked from behind. The two fell to the ground in a fury of screaming and hissing. The other boy acted quickly as he threw down his gun and took the cat by the tail and swung it off his friend. The two rushed back to tell their friends of the encounter.

1950 Kentucky boy’s first basketball game: Pinky Pilkington made his way from Kentucky up to Orange City, where his cousin was attending Northwestern Junior College. Here, Pilkington was exposed to a brave new world: basketball. When a timeout was called and the teams huddled, he recalled, “A bunch of guys all hugged each other an’ told a secret an’ clapped their hands.” Alarmed by crowds yelling, “Shoot!” Pilkington quickly made his way out of the gymnasium, determined to avoid any kind of trouble.

1985 Northwestern Beacon has no home: For a time, the paper was housed in Zwemer Hall, but that could hardly be considered an office. It had a maximum occupancy of one-and-a-half people! As construction for the new Rowenhorst Student Center began, blueprints included a section specifically for the Beacon. Unfortunately, plans changed, and the paper was left homeless. Eventually, the paper found a home in the basement of North Suites. The editors wrote about the move: “When an office was finally obtained, it was too damp to occupy for the first three months. After that, it was too condemned to fix up. Now, it’s a hole in the ground waiting to become a parking lot. As vacationers are drawn to the Grand Canyon, editors are occasionally drawn to the rim of the pit, to dream of what might have been.” 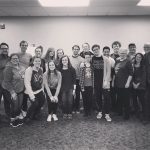 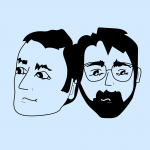