What do opossums, Shakespeare, virtual reality and Nirvana have in common? They are all featured in the new YouTube show Zander and Sander.

Lucas Sander and Alexander (Zander) Lowry are both seniors at NW with a love for theater and making people laugh. The two have been friends since their freshman year when they met working on Dancing at Lughnasa. Lowry was the assistant stage manager, and Lucas was the only freshman actor among seniors. The two clicked right away.

Their new show was hatched after they realized they would not be able to perform again during their senior year due to the current worldwide quarantine. It was also the perfect opportunity for them to let everyone know what’s happening on the near-deserted campus. They are among the few students still around.

Campus updates have included things like the famous Shirt No Pants squirrel and glimpses of  President Greg Christy.

Many of their segments are centered around the shared experience between them and their viewers of being kept in quarantine. One opening bit took a look into the future at what NW and the people still there will be like a year from now if the quarantine continues.

Another sketch they called “Self-Care & Self-Quarantine” was a version of a meditation class led by Sander meant to instill peace in its viewers and lead them to a state of tranquility.

But while the theme may be the same, the show is always a surprise. The various parts are an assortment of both improv and pre-recorded sketches. The only recurring segments so far are “Zander Writes A Letter  for Some Reason” and “Mail Time,” when they read fan mail.

For many budding fans, the show has become a lighthearted escape from the pandemic and a chance to focus on something positive.

“Zander and Sander’s show gives me a way to still feel like there’s something involving Northwestern to look forward to each week,” junior Lexi Van Surksum said.

Van Surksum is one of the many guest stars the show has featured so far. Some of their guest stars are able to appear in person while others call in and chat with Zander and Sander during “Mail Time.” They even featured Hospers  resident director, Michael Simmelink, who helped them open fan mail and answer questions during their second episode.

“I love that the show is allowing students to have a communal experience even though everyone is dispersed. We know that at 7 p.m. on Fridays, there is something going on we can all participate in,” Simmelink said.

Whether live or watched later, anyone can find the show via Facebook, YouTube or Instagram. Though originally scheduled for Mondays and Fridays at 7 p.m., the show is now airing only Fridays at 7 p.m. for a short 20-minute time slot. They encourage everyone and anyone to tune in and add to the live chat section in their YouTube link, which they check during the show.

Also, anyone can send in fan mail by email or Instagram or letter, if they so choose. Already, there is a fan war for who is the show’s biggest fan. The current contenders are junior Grace Spencer, junior Schuyler Sterk and Abigail Lowry, Zander Lowry’s younger sister. The title of biggest fan is soon to be awarded by the show hosts this Friday, April 17, so make sure to tune in to find out the answer or simply to find some encouragement.

Just as the show is helping others cope with quarantine, Zander and Sander are finding their own comfort through this.

“It helps us get through the lonely days knowing that there are people out there that enjoy seeing us,” Sander said.

They hope to keep the show going through the remainder of the semester and possibly into the summer to keep encouraging those near and far for as long as possible. 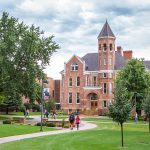