This Sunday, October 24, two senior music majors will be performing a joint senior recital for their respective instruments in Christ Chapel at 3 p.m. April DeHaan will be playing trumpet and Ashley Van Ravenswaay will be performing with both the tenor and soprano saxophone. The recital will be filled with many bold brass instruments exploring their full range of possibilities.

DeHaan will be performing a Sarabande, Intermede, and a Spiritual from

Ravenswaay will be performing a baroque piece titled Sonata on the soprano saxophone, along with several other pieces on the tenor saxophone that span different genres from French to twentieth-century pieces. Amy Linder will be DeHaan’s accompanist and Abby Van Peursem will be Ravenswaay’s accompanist.

As a closing to the recital, DeHaan and Ravenswaay will be performing a duet of a Bach piece titled Invention No. 15 in B Minor but, “with a little twist,” said DeHaan.

Performing a recital means some pretty big things for a music major. Along with being a requirement for the major, it serves as a demonstration of proficiency of the playing and teaching ability in a student’s performance area. However, it also holds deeper meaning for many students outside of the pragmatic reasons.

“You get to dig into the music so much and really develop your own understanding of why the composer wrote those specific notes in the way they did,” Ravenswaay said. “I also got to make the music my own.”

Music majors take quite a while to prepare for these recitals, oftentimes holding them in their folders for over two years leading up to the performance. This is done in order for the student to see just how far they come in their proficiency over their course of schooling. DeHaan elaborated with, “In some ways I’ve been preparing for this since I started lessons as a freshman.”

Even though these students hold and practice the music for a wide range of time before the formal performance, that doesn’t stop the normal performance nerves from arising. “Even though I have been preparing for quite some time now there are still so many different factors,” said Ravenswaay.

However, these women are choosing to focus on the positives of the occasion. DeHaan commented, “I know that I’ve made a lot of progress and that I have music worth sharing, so I’m anxious and excited for people to finally hear it after such a long preparation.”

Ravenswaay added, “No matter what happens during the performance, God gave me this opportunity to share my gift with the people that attend. I have also gained so much knowledge from preparing the music that I know it will all be worth it in the end.”

The recital is open for everyone to come and enjoy. Following the receipt will be a small reception with desserts and drinks. 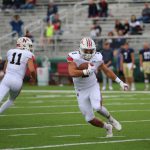 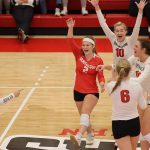