The undefeated Northwestern Red Raiders (6-0) faced off the Jamestown Jimmies (2-4) on their home turf last Saturday, October 16. The Raiders erupted the  program record of 774 yards of offense to down the Jimmies 63-7.

In the first quarter, senior Blake Fryar passed the ball to junior Michael Storey for a 41-yard touchdown. Sophomore kicker Eli Stader then nailed in the extra point. The Raiders defense went out to stop the Jimmies from getting a first down. The Raiders ended up with the ball as they kept fighting. After six plays junior Konner McQuillan ran in the ball for a two-yard touchdown. Stader then got his second extra point of the game. The first quarter ended with the score is 14-0.

After an incredible NW defense performance that stopped Jamestown from moving the ball, Jamestown was not  able to get a first down. Senior Cade Moser caught  a 19-yard pass from Fryar for another NW touchdown. The quarter ended with the score 35-0.

Junior Lorenzo Jones said, “I’m proud of the team since the Raiders kept showing consistency and determination with every snap of the ball. They practice hard and they leave everything they have in the field.”

After halftime, there was a change of quarterbacks. Fifth-year senior Tyson Kooima walked on the field to take his first snap of the season, coming back from an achilles injury last spring. His first play was a ball to Moser for a 79-yard touchdown.

Jamestown finally got a first down as they answered back scoring their first touchdown of the game that made the score 42-7. The Raiders were not done there as Jones caught a 38-yard ball from Kooima. The Raider defense stopped the Jimmies from scoring once again when the Raiders offense took over. Sophomore Kole Telford scored a 42-yard pass from Junior Luke Guggenmos. For the last touchdown of the game, junior Garrett Packer scored for a one yard run to end the game.

“I am happy to see us play at a high level coming off our bye week,” Head Coach Matt McCarty said. “The defense also played outstanding.”

NW looks to extend their win streak Saturday, October 23 as they travel to Yankton, S.D. to face the Dakota Wesleyan Tigers. 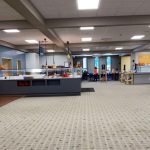 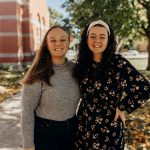