Brown is also the Henry Bast Professor of Preaching at Western. As a professor, Brown teaches one course a semester in the area of preaching.

“I love being a teacher and seeing a student become what the Lord longs for them to be,” Brown said.

As part of his responsibilities, Brown oversees the campus life of Western Theological Seminary. He also works to ensure the members of the school do their best to follow their mission statement: “To prepare Christians called by God to lead the Church in mission.”

Brown believes the president’s job is to to ensure that all of the faculty and staff members have the best possible working environment for them to flourish in.

“There are great people offering their best at Western Theological Seminary and they deserve the best conditions to do that work,” Brown said.

“I love coming to NW and to Orange City for many more reasons than this little article can contain,” Brown said.

Some reasons include seeing a few alums of Western who serve in several of the churches around the city. He also mentioned our new Christian Formation Director Mark DeYounge as well as many others are graduates from Western Theological Seminary.

“I love to see all of the people I know, and to see what God is doing at this school underneath the wise and gracious leadership of President Greg Christy,” Brown said. “I also love to visit the Dutch Bakery.”

DeYounge invited Brown to campus for many reasons, including his passion for sharing Scripture with his students and others around him.

“Brown is a good friend, and his passion for God’s word and faithfulness is contagious,” DeYounge said. “His energy is very contagious, and he is a very gifted pastor, which you saw if you went to chapel. Campus will be blessed by Brown’s presence.” 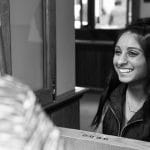