Professor Juyeon Kang will be the first professor from Northwestern to play at New York City’s famous Carnegie Hall.

Sophomore Andrew Currier, one of Kang’s piano students, explained the significance of performing at Carnegie Hall.

“It’s like a pianist’s goal,” Currier said. “There’s no best level of piano, but if you were to define the moment when you’re at your best, it’s when you play at Carnegie Hall. I feel grateful and lucky that she’s my teacher knowing that she’s playing there.”

Proceeds from the concert will go to the Reformed Church in America Care Network to help people along the East Coast in the ongoing recovery from Hurricane Sandy.

“I’m pleased that I can partner with the RCA Care Network and help those in the New York area who are still rebuilding their lives,” Kang said.

The title of the concert, “Joyful Dances” mirrors that of Kang’s second album. Profits from the album will go toward scholarships for NW’s international students.

“It’s what I did last time with my last album, and it’s just my way of giving back to NW,” Kang said.

“I seek to express my Christian faith through music,” Kang said in a release from NW’s public relations department. “While I’ve always desired to perform in Carnegie Hall, I wanted this opportunity to benefit others.”

The theme verse for her concert is Jeremiah 31:4, which says, “I will build you up again … Again you will take up your tambourines and go out to dance with the joyful.”

Kang has been a member of NW’s faculty since 2003 and is an award-winning Steinway artist.

“After purchasing your own Steinway piano, you can contact the company to undergo a rigorous application and review process of information and credentials before being determined whether or not you qualify,” Kang said.

Steinway artists are provided with a piano by Steinway & Sons at every performance.

“It’s simply an honor to have such a privilege provided for by Steinway at my performances,” Kang said.

Kang has played around the world and won several other first prizes at various competitions. Some of her notable performances include a concert at the Polish embassy in Washington, D.C., on the 150th anniversary of Chopin’s death and appearances as a soloist with the Korean Symphony Orchestra and South Dakota Symphony Orchestra.

A review from American Record Guide said she “played heartily” with “a considerable amount of charm and always beautiful tone control.”

According to a NW news release, Kang has earned doctoral and master’s degrees in piano performance and literature, as well as a master’s degree in pedagogy of music theory at Eastman School of Music in Rochester, N.Y., where she was awarded a distinguished performer’s certificate. Kang earned a bachelor’s degree in music at Seoul National University and the esteemed artist diploma in piano performance from the New England Conservatory of Music in Boston, where she was previously a faculty member.

At NW Kang teaches a wide variety of classes related to the piano, which are available for all students to take — not just music majors. Each year, four different levels of piano lessons are offered along with written and oral music fundamental labs and music theory. The classes that are alternated between every two years include piano literature and piano pedagogy. Piano pedagogy is a class that prepares students to teach others how to play the piano. According to Kang, this would be a great class for those who plan on teaching children how to play in the near future. 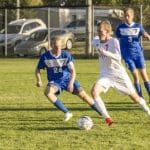