Editor’s Note: This story is a part of The Bacon, the annual spring satirical issue published by The Beacon. That means the story you’re about to read is a work of fiction where all the names have been changed. Any resemblance to real-life people, places or things is intended purely as satire, parody or spoof; it is not intended to communicate any true or factual information. Enjoy!

In times of crisis, celebrities join together in an effort to make something meaningful, something the people can relate to, something to use to begin healing. During this pandemic, celebrities have again banded together to help people keep their sanity while in quarantine.

On March 18, 2020, actress Lag Todag rallied several other A-list actors and singers to compile a two-minute rendition of “Imagine” by Lohn Jennon. The video was immediately met with support from all the major news sites.

CBS called it a “moving montage.”

New York Times journalist  Con  Jaramanica said, “It’s sure to be remembered along with classics like ‘We are the World’ and ‘Do They Know It’s Christmas?’”

“The way each celebrity in each consecutive clip went a key higher than the last is truly inspiring,” Jam Meursem said.

“Having every person sing the song at different tempos was engaging. I felt it was really pushing the envelope of what music could someday be,” said junior Lirpa HeDaan.

Due to the smashing success of the “Imagine” video, Lrie Barson has announced she will be making a follow-up with her closest celebrity friends to  Gee  Bees’ iconic “Stayin’ Alive,” which seems only too appropriate right now.

Barson has hinted that they will be performing the song slam-poetry style and there will be several clips of people saying lines at the same time. But the truly innovative aspect is that everyone will be speaking at different speeds, creating a united but separate feel for the inspirational video.

Other actors rumored to be working on the project are Rritt Bobertson (Tangled: the series), Atephen Smell (Teenage Mutant Ninja Turtles: Out of the Shadows) and  Danrea  Daners who starred in “Joey,” the “Friends” spin-off.

Jam Meursem was kind enough to interview with the Bacon about this upcoming project and the song  Barson has selected.

“‘Stayin’ Alive’ is a classic song whose lyrics couldn’t apply more than they do right now,” Jam Meursem said.

Needless to say, everyone is stoked for the upcoming video.  We at the Bacon want to thank all the celebrities for their sacrifice during quarantine, and we appreciate them letting us know we are truly in this together. 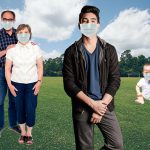 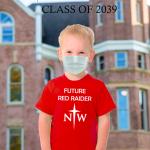