The Flaming Lips is a band that formed in Oklahoma City all the way back in 1983, and their newest album, Oczy Mlody, was released just last month.

The Flaming Lips is a rock band tending to lean towards what one might call “space rock.” It is the kind of sound that makes you think of kaleidoscopes and David Bowie.

The album name is a Polish phrase that means “eyes of the young.” The album is a rock opera, so all of the songs relate in some way to this idea of eyes of the young. This is why the music is filled with childlike wonder in themes such as animals and fairy tales. Please be forewarned that, although this album brings about a childlike mindset, it is not appropriate for children; several songs contain explicit lyrics.

It is impossible to say that the lyrics are not unique, though. For instance, the track entitled “One Night While Hunting for Faeries and Witches and Wizards to Kill,” easily my favorite track, tells a narrative about what happened when the narrator tried to take on a wizard with a gun. Pro tip: do not try to fight a wizard with a gun.

Another fun example of lyrical singularity comes from the track “There Should Be Unicorns.” The lyrics resemble what happens when imagination goes a bit too far. The lead singer expresses a desire that “[t]here should be unicorns / the ones with the purple eyes / not the green eyes.” The difference between the unicorns with purple eyes and those with green is never explained. The band also seems to think there should be “[s]ome edible butterflies / We put ketchup on.” It would truly be a delicacy, I am sure. At the end of the song, comedian Reggie Watts provides a spoken word imagination fest involving the purple-eyed unicorns and bribing policemen.

In the album before Oczy Mlody, The Flaming Lips made an album with Miley Cyrus titled Miley Cyrus & Her Dead Petz. Cyrus makes a reappearance with the Lips in the final track of Oczy Mlody in a song entitled “We a Family.” This final track on the album expresses a different tone than the rest of the songs, so much so that it almost feels like a bonus track.

I should mention that I do not, nor ever have I, considered myself a fan of Miley Cyrus— not even when she was Hannah Montana. Still, “We a Family” is a heartwarming song.

Stuart Berman explains the two artists’ relationship best by saying, “Cyrus uses the Lips as a wrecking ball to her past, while the Lips use her a conduit to relive theirs.”

The two generations were brought together by a mutual need and likely feel a lot like family at this point.

Oczy Mlody is a type of album that is not everyone’s cup of tea. It is very obviously released by a band of a different generation. Still, I found it to be a truly enjoyable album. It has something different to bring to the table than typical chart-toppers and is a good reminder to keep your childlike wonder even as you grow old. 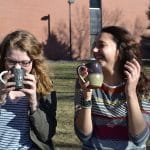