Chris Yaw is beyond thankful for the situation that he has inherited as the head women’s basketball coach. After seven years as an assistant to NAIA Hall of Famer Earl Woudstra, Yaw was given control of the program this past spring when Woudstra decided to hang up the whistle after winning his fourth championship.
“The timing and the place felt absolutely right,” Yaw said, “and I felt like being with Coach Woudstra had prepared me well over the years.”
While Yaw was not deemed a coach-in-waiting, (seen in college football with Jimbo Fischer at Florida State or Dana Holgorsen at West Virginia), Yaw’s commitment to the program showed that he deserved to be considered when the position opened up.
“Coach Woudstra and I had discussed what my dreams and aspirations were as a coach,” Yaw said. “But there certainly was never a ‘Hey when I’m done, you’re in.’ I think the decision was bigger than that.”
His résumé didn’t hurt either. The defensive play of the last string of championship squads can be traced back to Woudstra delegating the responsibilities on defense to Yaw.
“The last four or five years Coach Woudstra had me run the defense. I was a defensive coordinator type, but with basketball instead of football.”
Over the years, Yaw found that he agreed with many of the things being done in the program, which is why he will not drastically change the style of play that fans have seen in recent years.
“The mentorship of Coach Woudstra really solidified where I was as a coach philosophically, so there really aren’t any things I’m intentionally trying to change,” Yaw said. “Part of the reason we made such a good coaching team was we agreed on so many philosophical things.”
Yaw envisions continuing a style of basketball that forces opposing teams to take low percentage shots because of the Raider’s hard work defensively. Pressure is applied with sound principles. When the bad shot is forced, NW is looking to “be the best rebounding team on the floor that night,” which sets up an offense that relentlessly pushes the tempo, “not recklessly, but fast and efficiently.”
Yaw visibly has confidence in what the team is capable of this season, but without the sense of entitlement that might entrap a normal coach walking into such a prepared situation. While Woudstra’s footprint on the program is still felt, there won’t be a shadow weighing down on the new coach.
Chris Yaw can’t imagine it; he’s simply too thankful towards his mentor. 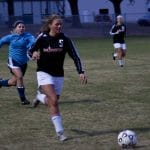 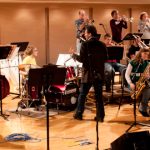 Add some music to your weekend